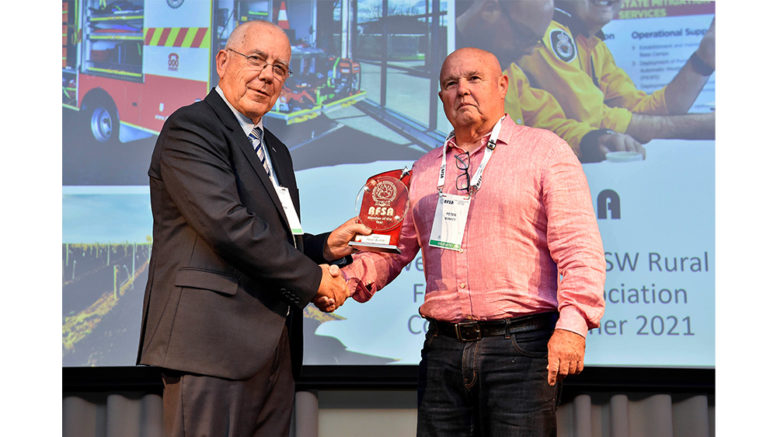 Burfitt, who is a volunteer firefighter with Matcham-Holgate Rural Fire Brigade, has held numerous representative positions in the RFSA including Secretary of the Gosford Branch, Secretary of the Central Coast South Branch and Delegate to the RFSA State Council.

He has also served on NSW RFS/RFSA Consultative Committees and was RFSA Delegate to the Local District Liaison Committee.

RFSA President, Brian McDonough, said Burfitt was a worthy recipient of the award.

“Peter was integral to the development and a driving force behind the creation of our newest Division, RFSA Division 17 on the Central Coast.

“He campaigned throughout the districts and formed two new branches from scratch in Wyong and Lake Macquarie.

“Member of the Year acknowledges a member who has made exceptional contributions to the RFSA’s projects and programs.

“With his steely determination and tremendous work ethic, Peter has campaigned tirelessly on behalf of his fellow firefighters on the Central Coast.

“I thank him for his ongoing contribution to the growth and success of the RFSA,” McDonough said.

Burfitt was presented with the award at a ceremony at RFSA Conference 2021 held on June 5.

Established in 1996, the RFSA is a non-government, not-for-profit legislated representative organisation of the volunteers and staff of the NSW Rural Fire Service.