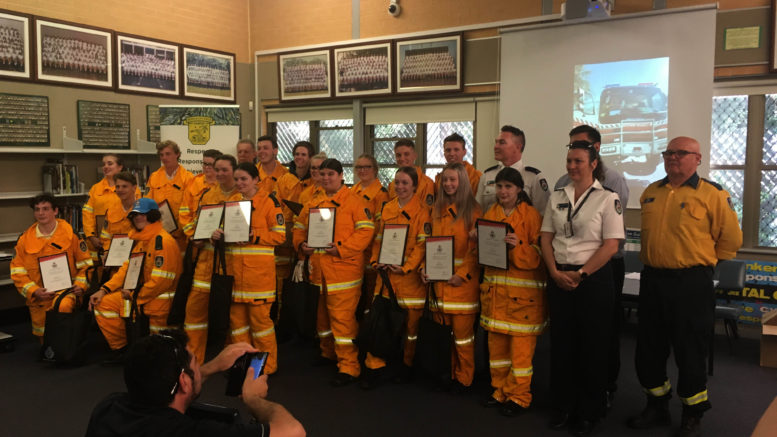 The RFSA is a support group offering invaluable assistance to RFS volunteers all over the state and Burfitt has been involved for more than 20 years, in addition to being a volunteer with the Matcham-Holgate brigade.

He has also served on NSW RFS/RFSA Consultative Committees and was RFSA Delegate to the Local District Liaison Committee.

“I’m a little embarrassed to be honest; I have just been doing my thing,” Burfitt said of the award.

“The RFSA exists to support its members in protecting the community and does this in a number of ways.

“The association really hit its straps around 1997 and while there was some assistance initially, we now raise all our money through raffles and donations.”

The money raised is used in a variety of ways, from supplying grants of up to $10,000 to brigades for equipment they are not able to obtain through the RFS, to funding a mental health support program for members.

“We also offer support to families of volunteers hurt on duty and even sometimes help members out when they are experiencing hardship.

“For example, one member on the Coast was diagnosed with cancer and couldn’t afford the necessary medication, so we were able to offer financial assistance there.”

Burfitt said the RFSA also offers advice to brigades on appropriate infrastructure, tankers and equipment, provides food and refreshments to volunteers called out of area and is working on purchasing fridges for every new tanker so volunteers have access to cold drinks in the field.

Burfitt has been a volunteer firefighter since 1989.

“I have been very lucky not to have experienced the worst in the field, but I have had some tense times working in the control centre when fires have started to impact houses,” he said.

“I became involved with the RFSA because I wanted to join a group which could represent us at a level to put issues of concern to the RFS Commissioner.

“We also provide things such as lockers and thermal imaging cameras to new stations and occasionally run family days for our volunteers.”

RFSA President Brian McDonough said Burfitt is a worthy recipient of the award.

“Peter was integral to the development and a driving force behind the creation of our newest Division, RFSA Division 17 on the Central Coast,” McDonough said.

“He campaigned throughout the districts and formed two new branches from scratch in Wyong and Lake Macquarie.

“’Member of the Year acknowledges a member who has made exceptional contributions to the RFSA’s projects and programs, and with his steely determination and tremendous work ethic, Peter has campaigned tirelessly on behalf of his fellow firefighters on the Central Coast.

Burfitt received the award at a ceremony at RFSA Conference 2021 on June 5.