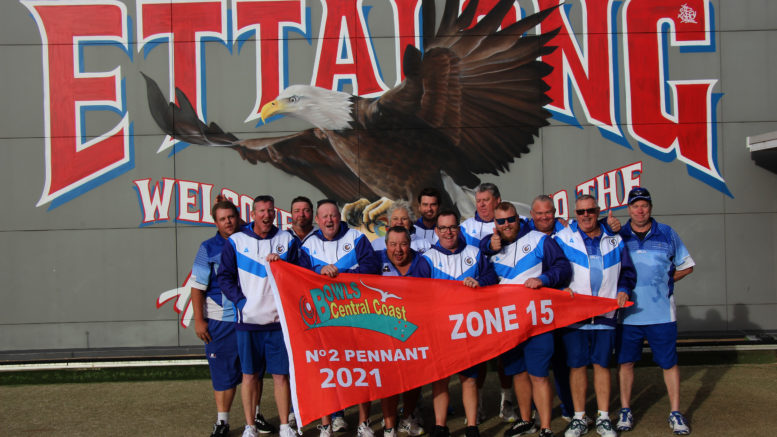 The last of the Central Coast Zone Pennants finals were played over the weekend from May 29 – 30, wherein two grades were won by northern clubs.

In Grade Two, it was Gwandalan who came away with the win and in Grade Four, it was Ourimbah, while in Grade Five, Ettalong defeated Wyong.

In Grade Two, it was a convincing win for Gwandalan over The Entrance, ending 74 – 56.

Despite a strong showing from The Entrance’s Kane Coulls, the combined efforts of Gwandalan’s Ben Ritzau, James Cook and Shaun Ireland were too much for their fellow northern competitors.

For Ourimbah in Grade Four, the win was more tightly contested against Gwandalan, but in the end it was secured with a 65 – 52 win.

By taking out two rinks against Gwandalan’s one, and with Anthony Coates impressing through a 34 – 6 shot win on rink 10, Ourimbah were able to ensure victory.

Peter Parciany and Michael Kelly both impressed for Gwandalan, both of whom outshot their opponents of Mark Commins and Peter Messingham.

Coates’ early established lead was strong enough to be maintained until the end.

Ettalong’s win over Wyong in Grade Six finished 68 – 50, after the Peninsula team took two of three rinks, with a big 34 – 18 win for skipper, Jason Rigby on rink 5.

Ettalong have also won the Grade One Pennants this season after coming first on the ladder at the end of the sectional rounds.

This is the eighth time Ettalong have taken out Grade One since 1995, when the Central Coast became a free-standing Zone.

As well as this, Ettalong won the Grade Three Pennant, also by topping the sectional ladder at the season’s end.

Across the Coast, bowls teams from five different clubs have now qualified for the State Finals in July.

These clubs are Halekulani, Bateau Bay, Gwandalan, Ourimbah and Ettalong.

Of the seven teams across the seven grades to have made it, four come from northern Central Coast clubs, with the final three all coming from Ettalong.

Bronze for Vicki and Gail at State Senior Pairs Championships

Be the first to comment on "Northern clubs dominate Pennants Finals"