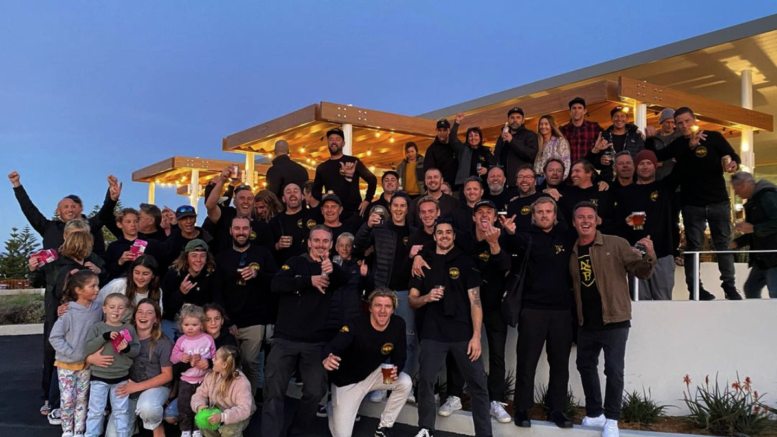 North Shelly Boardriders celebrate their Kings of the Coast win

The annual surfing event, Kings of the Coast, went ahead at Forresters Beach on Saturday June 5, with the North Shelly Boardriders taking out three of five heat wins, as well as the accumulative victory at the end of the day.

From across the Central Coast came nine boardrider clubs, each eager to get into the competition after two previous dates had been postponed due to weather conditions.

Across the day, there were five heats with eight club teams in the Under 21 Juniors, Opens, Seniors, 12-16 year old Groms, and then six in the Queens.

Each 80 minute heat included five surfers representing each club in a tag-team format with points accumulating towards a total club shared end score.

Each surfer was allowed a maximum of two waves before paddling in and tagging their next team mate, with a bonus four points being given to any team that had all five surfers complete their two waves within the time frame.

As well as this, the quality of the waves caught were assessed by a pool of judges who watched from the shoreline, nestled atop a sand hill on Forresters, above the mingling crowd of boardriders who had arrived from up and down the coast.

In the end, it was North Shelly who came away with the ultimate win after winning three out of five of the events and coming second in the other two.

After two second places in the Juniors and Opens, three wins followed in the Seniors, Groms and Queens.

This is the eighth time North Shelly have been crowned Kings of the Coast and the second consecutive Queens of the Coast win after only two years of the women’s heat.

Runner-up on the day was Avoca Boardriders after a win in the Opens, second in the Groms and third in the Seniors and Queens.

As well as this, Sandon Whittaker from Avoca Boardriders was decided to be the surfer of the day, taking out the individual accolade.

In third place behind Avoca was hosts Forresters, who achieved their best result when they came third in the Groms and fifth in the four other heats.

As an annual event wherein these separate board riding clubs come together to show off their best surfers, the Kings of the Coast title is highly sought after, bringing with it both lifelong memories and bragging rights for 12 months.

Next year, the competition will be back on with Macs Own Boardriders set to host at Macmasters Beach.

Until then, the Kings of the Coast reside in their North Shelly throne.

Reg the seal hauls out on Forresters Beach