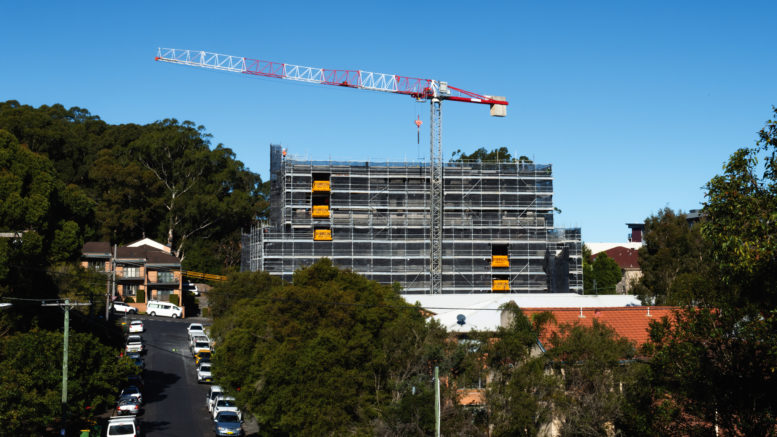 The development in Beane St

A 41-unit social housing development in Beane St, Gosford, will be ready to accept its first tenants next year.

Parliamentary Secretary for the Central Coast, Adam Crouch, and Minister for Water, Property and Housing, Melinda Pavey, dropped in to inspect construction work last week as the building reached its highest point.

Pavey said the $15.3M development will house as many as 60 residents, with 77 new jobs created to bring it to fruition.

“From the Central Coast to the country, to inner city Sydney, the delivery of new social housing is transforming communities by creating jobs and income, encouraging new investment, and delivering homes for those who need them most,” Pavey said.

“The NSW Government fast-tracked the approval of this project through the Planning System Acceleration Program to help the State’s COVID-19 economic recovery.”

The development, which commenced construction in August last year, will comprise of 21 one-bedroom units and 20 two-bedroom units, with basement parking for 19 vehicles plus spaces for motorcycles and bicycles.

The building will contain water and energy saving features, including solar panels and recycled water collection for gardens.

Crouch said the project would not only boost the number of social and affordable houses available in the region, but also boost the local economy.

“Apart from creating local jobs and helping local suppliers, around 15 per cent of the skilled tradespeople at this site are apprentices, which means the project is helping to broaden our construction industry skills base,” he said.

“When the first sets of keys are handed over for these 41 units next year, residents will only be a short walk away from Gosford Station, Gosford Hospital, local schools and nearby shops.”

The project forms part of the NSW Government’s Future Directions for Social Housing, a plan to build more and better social housing that blends in with local communities.

Froggy’s demolition to be completed by Christmas