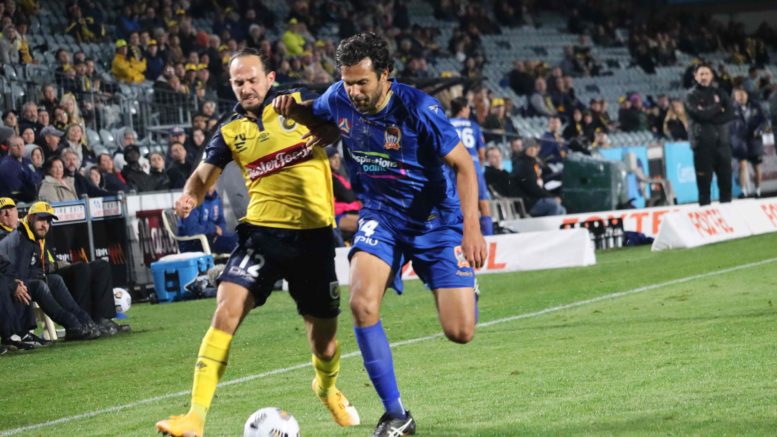 The Central Coast Mariners have suffered another home venue loss at Central Coast Stadium to their F3 rivals, the Newcastle Jets, on the evening of Tuesday, June 1. After defeating the Jets twice this season already, most recently one fortnight ago, the Mariners failed the triple, ending two goals behind at 0 – 2.

After the Mariners have ended the three previous seasons as the wooden spoon, it is now the Jets who find themselves at the bottom of the ladder and going into this match as clear underdogs. Perhaps due to this, the opening mindset of the Mariners was to attack with a lot of energy and push for an early goal.

Yet similar to many of their recent games, what was lacking in their play was working shots on goal. This was largely due to the firm defensive game plan of the Jets which involved cutting out the passing lanes that all season have set the Mariners up well in opportune assisting positions.

On the offensive, the visitors matched the energy of their hosts but also benefitted from strong counter-attacking play. This is how they put away their first goal in the 27th minute, scored by Roy O’Donovan.

A lobbed through ball was launched by Jordan O’Doherty from his team’s defensive half, finding the head of Mariners defender, Key Rowles, who inadvertently directed the ball into the feet of Archie Goodwin. A wide pass to O’Donovan found the ex-Mariner on the outside of Jack Clisby in defence and his sharp across goal strike sped the ball past keeper, Mark Birighitti and into the net.

With the opening goal secured, the momentum continued to shift in the favour of the away team and it wasn’t long before they affirmed their strength with a second score. This came in the 33rd minute, put away by Lucas Mauragis, once again on the counter-attacking break.

The ball was stolen from Matt Simon on the half-way line, leading to a three-on-three attacking situation for the Jets. Angus Thurgate advanced the ball forward with pace before slicing in between Daniel Hall and Gianni Stensness with a through ball to find Lucas Mauragis on a 45 degree angle ahead of goal.

Birighitti was able to drop low enough to get a foot onto the low struck ball and deflect it upwards, but he wasn’t able to redirect it away from its passage to goal. Stefan Nigro rushed under the crossbar in an attempt to header the ball back out, but his backward momentum was too much to get behind the ball and push it back in-field.

With the score remaining 0 – 2 at half time, the Jets returned to the field with the intention of sealing off their win through a careful defensive approach. This allowed the Mariners more time on the ball, but they were let down by poor execution in their passing and crossing play.

They also continued to suffer from a lack of shots on target. The only player all game to threaten Newcastle keeper, Jack Duncan, was Clisby, hoping to repeat his previous Macarthur game glory. The substitution of Simon for Alou Kuol also failed to yield results, with the young super-sub unable to find goal for his ninth game in a row.

In the end, it was a disappointing result for the Central Coast side, although they remain in third place on the A League ladder ahead of Macarthur, but only on goal difference. Fortunately, their involvement in the finals series is now confirmed, due to Wellington Phoenix only drawing with Brisbane Roar on Sunday, May 30.

Nonetheless, the end positioning of the boys in yellow between third and sixth place is still variable, and this will determine whether the team will have a home or away game for their Elimination Final. The result of their final season game against Western United will greatly effect this outcome; a win should ensure them a third place finish.

This game will again be played at Central Coast Stadium on Saturday, June 5, at 5:05 pm.