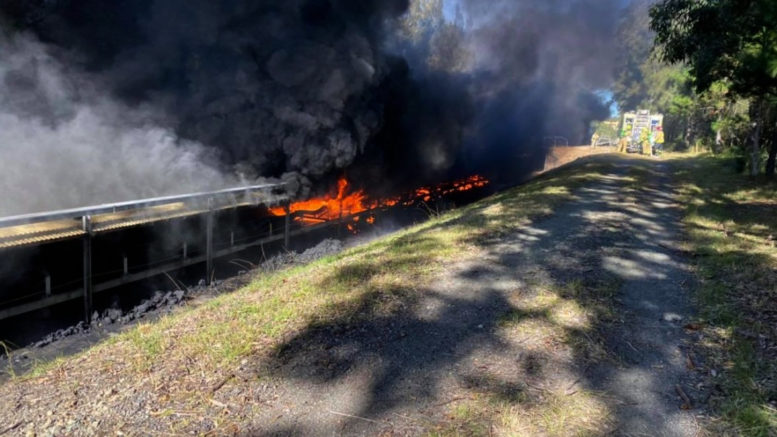 Just before 11.30am on Saturday, June 5, firefighters were called to a machinery fire on Delta Electricity land on Construction Rd, just off Ruttleys Rd, Mannering Park.

The fire engulfed about 100m of a conveyor that runs between Chain Valley Colliery and Vales Point Power Station.

Delta Electricity Company Secretary, Steve Gurney, said the conveyor was in operation at the time and Delta staff were undertaking routine inspections of the conveyor belt.

“Preliminary investigations suggest that the fire was caused by friction on a conveyor roller,” he said.

“As the area is in a well controlled buffer zone, there was no threat to the local community, the mine, power station or the environment.”

Gurney said repairs were carried out after the incident and the conveyor was expected to be operational again by Tuesday, June 8.

“There was no disruption to Delta’s operations and we continued to generate power during that time,” he said.

“Delta would like to acknowledge the rapid response of emergency services and particularly the Mannering Park Rural Fire Service which was able to contain and extinguish the fire,” Gurney said.

Fire crews remained on the scene for some time afterward, cooling hot spots until the site was rendered safe.