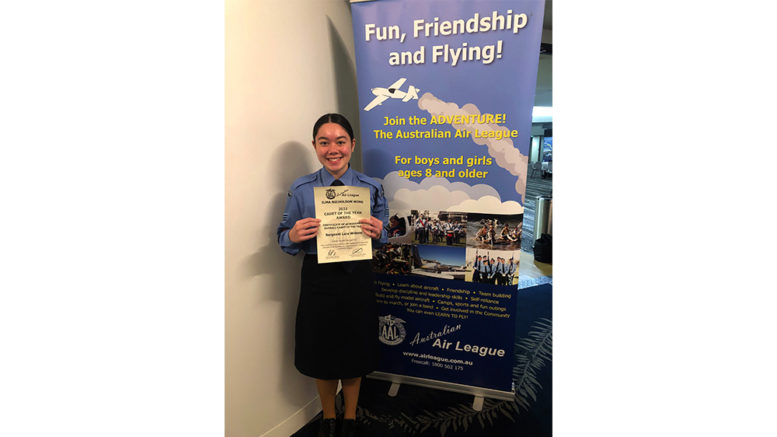 Doyalson Air League Senior Cadet Sergeant, Lara Wilbow from Warnervale, has been awarded the Overall Cadet of the Year for the Central Coast/Hunter Ilma Nicholson Wing of the Australian Air League.

The annual formal event was held on June 19 at Doyalson RSL after it was missed in 2020 amidst Covid restrictions.

Wilbow, after being awarded the winner, presented her speech sharing her most memorable times in the Air League.

“My most memorable and important moment in the Air League was the day I competed for State Junior Cadet of the Year,” she said.

“This was in 2015 at the Blacktown headquarters, I was nine years old at the time and about 122cm tall, and it was quite daunting at first, but I knew that with the help of my friends at Doyalson, I was fully prepared for anything.

“It was the first time that I felt the true importance of the Australian Air League.

“All my hard work and dedication preparing me for this one event was being put on display at these interviews.

“At the time it didn’t really feel like much, it was just like studying for any other badge or practising drill for group review … but I finally understood what it was like to be representing the whole of Doyalson.

“I’ve only ever represented Doyalson through team activities, but to be representing Doyalson by myself was a whole different experience.

“During that moment I received an overwhelming sense of belonging and attachment.

“It was also at this point where I knew that there was so much more to come.”

She made her way up through the ranks and was promoted to sergeant in 2020.

“My experience within the Australian Air League has opened many opportunities for me as well as creating long lasting friendships and bonds,” Wilbow said.

“This experience plays a key role as to who I am today and I hope to re-create those experiences with the younger generation through my leadership and guidance.”

Wilbow will now undergo preparations as she competes for state representative in the NSW Air League Group Review to be held in September.

It was also a proud moment for the Doyalson Squadron as they celebrated their 34th anniversary on the night.

In 1941 she enlisted in WAAAF and served 32 years in WAAAF Association & Ex-Servicewomen’s Association after World War II.

In 2002, she was awarded OAM for service to veterans and Australian Air League.

In 2019, Ilma Nicholson Wing restructured as part of NSW Group and sadly Mrs Nicholson passed away in 2019 just short of her 100th birthday.