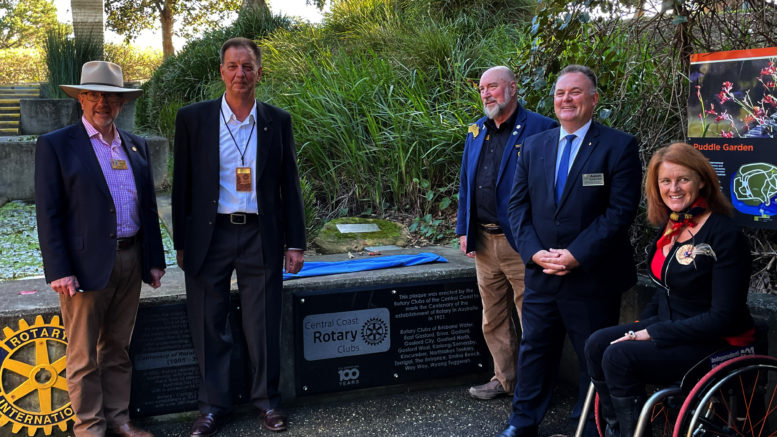 A plaque has been unveiled at Mount Penang Gardens in Kariong to mark the centenary of Rotary in Australia.

The location of the plaque is particularly apt, given that in 2005 the combined clubs of the Central Coast contributed $70,000 to the construction of the Puddle Garden in the gardens, to mark the occasion of the foundation of Rotary International in 1905.

A plaque was installed on that occasion and a time capsule was buried to be opened in 2055.

The new plaque was unveiled on June 2 by the Governor of Rotary District 9685, David Clark, along with Parliamentary Secretary for the Central Coast, Adam Crouch, Member for Gosford, Liesl Tesch, and other dignitaries and Rotarians.

The first Rotary Club in Australia was formed in Melbourne in 1921 and was soon followed by a club in Sydney.

Over the course of a century, Rotary’s footprint in Australia has expanded to over 1,100 clubs nationally with more than 25,000 members.

The Australian clubs are part of a broader movement of 1.2 million Rotarians in nearly 33,000 clubs around the world.

The first Rotary club on the Central Coast was formed in Gosford in 1945 and over the next five years clubs were formed at Wyong and Woy Woy.

There are now 15 clubs on the Central Coast stretching from Toukley in the North to Umina Beach in the South.

Local clubs are part of Rotary District 9685 which extends from the Sydney Harbour Bridge to Lake Macquarie and west to the Blue Mountains.

Over the past 75 years local clubs have raised millions of dollar in support of local and overseas projects.

This includes the building of a hospital on the Kakoda Track in Papua New Guinea, seed funding which led to the establishment of the practice of speech therapy in hospitals in Vietnam, and the delivery of 15 containers of wheelchairs (3,500) to developing nations.

The 15 Rotary Clubs of the Central Coast have been very active internationally and locally, raising funds and assisting those in need in the best Rotary tradition of service above self.

Kariong Library to be closed for relocation