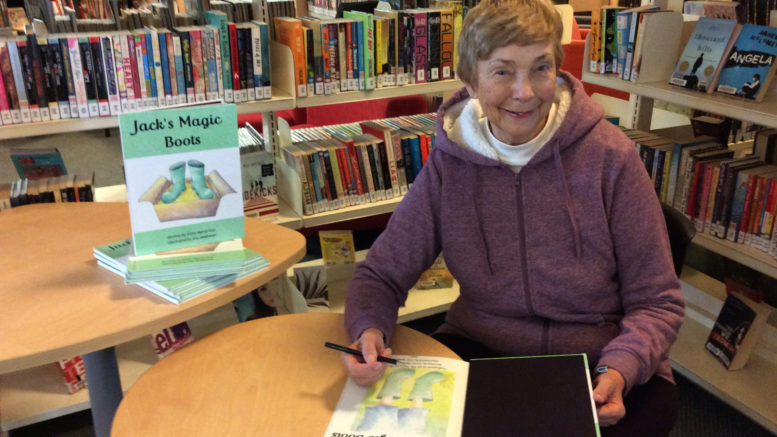 According to the Australian Institute of Health and Welfare, seven out of 10 children have been bullied at least once within a year, making it a serious issue in schools around the country.

The book is based on a student’s story about overcoming bullying.

“I had a boy at the school who was terrorised by bullies,” Sister Ross said.

“He was pushed over one day at bus lines, and he was traumatised, so he told me the story and said he didn’t go down, which inspired me to write this book.

“I wrote the book in one sitting and after I had completed it, I read it to Jack’s mother and then Jack and they both really loved it.

“When I read it to Jack, he said to me ‘I have a pair of green boots’, and he realised the book was about him.

After getting such a positive reaction from Jack and his mum, Sister Ross decided that she wanted to publish the book, and with help from MacKillop’s Librarian, Bronwyn Sandeman, Bronwyn’s daughter, Ella, provided the illustrations for the book.

“When I saw Ella’s drawings I loved them, they were so brilliant,” Sister Ross said.

“The pencil colourings were amazing and it really gave the book a childlike feel.

“We’re all really impressed with how the book turned out,” Sister Ross said.

Together the team created 100 hard copies with the internet program Snapfish.

Since giving Jack a hardcover version of the book, Sister Ross said that he reads it every night, and reads it to family members that come to visit.

Not one to sit on her hands, Sister Ross said she has already written a second book which she hopes to make hardcover versions of as well.

“I’ve already written another one, I wrote it a few days ago,” she said.

“This one is called Tina’s Purple Power, and it’s about a girl called Tina who is very clumsy, and she finds these magic purple slippers that help her stay upright.

“I’m just waiting for Ella to have some time to do some more fantastic illustrations again as she is busy with university work,” Sister Ross said.

With the help of Bronwyn, the team have sent Jack’s Magic Boots to book publisher EK Books.

“I really want to get this book out to all the Jacks of the world.

“I just want to give it away; I don’t want any money for it,” Sister Ross said.

The War and Peace of Warnervale Airport