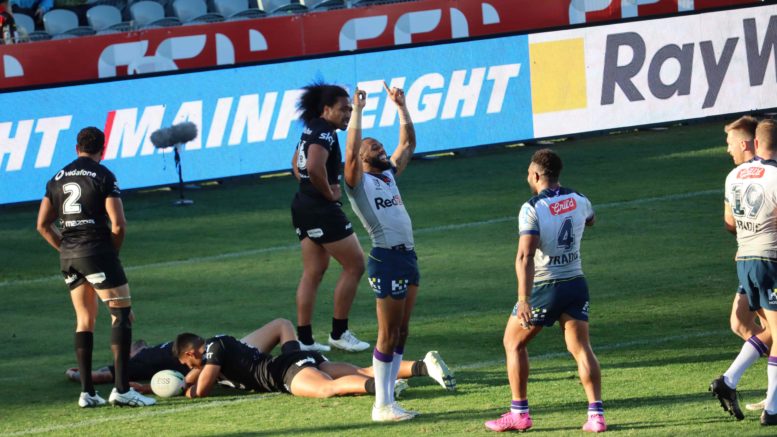 The New Zealand Warriors have faltered in their Round 14 match against Melbourne Storm at Central Coast Stadium on Sunday, June 13. It was a difficult match against the defending champions, finishing 16 – 42.

The game followed after a rousing performance from the quintessentially Kiwi rock band, Dragon, who performed their greatest classics in the stadium as part of the Great Big Kiwi Coast Party.

As well as this, their were New Zealand friendly treats all throughout the day, including a pre-game family festival on the West Gate lawn and a Haka performed in traditional dress. Unfortunately, the Kiwi focus could not translate to on-field success, with the game soon turning unwaveringly in the favour of the Storm.

Early attacking opportunities came for the Warriors, but a number of handling errors prevented them from taking advantage. Storm also suffered from early nerves, leading to a couple of dropped balls and a conceded penalty in the 10th minute. Kodi Nikorima took the chance to socket an easy penalty goal, providing a two-point lead.

The score was quickly levelled by Storm through a penalty goal of their own. From here, an eight minute lull was ended with the first try of the game going the way of the visitors. It came on the back of classic catch, draw and pass play, with Dean Ieremia capitalising on the open space between himself and the try line.

With the lead established, it wasn’t long before they came knocking on the door for more. Metres away from the try line, another well executed pass from Grant found Brandon Smith. A quick inside step from the Hooker launched him in-between the Warriors’ defence and led him to the white paint for his team’s second try.

Storm’s momentum continued to rise to the dismay of the desperately defending Warriors. Another attack came straight away, and a third away team try was looking close to certain. However, a shockingly powerful tackle from Harris-Tavita halted this attack in it’s final movements, forcing the knock-on from Brandon Smith.

Despite this set-back, Storm kept heavy pressure on the try line. Another attack found Ieremia out wide and over the line, but the flexible hands on Tuivasa-Sheck got underneath the ball and prevented the grounding, as shown on the video-referee check.

However, once again Storm came at the line and were able to score their third try of the game. A missed tackled on Hynes gave him the time to craft a small grubber out wide for Josh Addo-Carr. Storm’s winger had to be agile to gather the ball, straighten up and find the try line before running out of touch, always whilst running at high speed.

With the damages from constant Storm attacking onslaughts in the first half finally over, the Warriors went into the sheds with a 16 point deficit in need of overturning. They had shown defensive vigour on multiple occasions to prevent tries, but now found themselves in need of revitalising their own attacking prowess to find redemptive tries.

Yet despite showing strong energy in the opening five minutes of the restart, a costly handling error between Tohu Harris and Nikorima led to a try up the other end for Storm. Brandon Smith was sharp to scoop up the ball and begin the advance into his teams’ attacking half. The counter attack was stifled, but the set of six nonetheless ended in a try.

On the fifth phase, Grant shot off quickly from dummy half and sliced through a sharp grubber for himself to recover. He dived under the posts bravely, although lost control of the ball backwards for Jahrome Hughes to regather and ground. The video-referee check confirmed these details and announced the try for Storm.

After 12 minutes of back and forth play, another try came for Storm, this time put away by Justin Olam. Hynes’ cut out pass found Addo-Carr out on the wing, who shifted it back inside for Olam to catch and take to the corner. Now ahead by 28 points, the day remaining 20 minutes was looking a daunting task for the hosts.

Nonetheless, the opening try for the Warriors was soon to come with Ken Maumolo scoring on his final game for his team. It was a team try from a play that included six passes across the paddock before reaching Maumolo with still plenty to do. First shrugging off Ieremia, Maumolo then lunged for the corner before Hynes could push him out.

Storm were by no means done for the day, with Grant again showing his superior agility from dummy-half. After a sleight to the left and a quick step out the right, Grant weaved himself between Leeson Au Mau and Bayley Sironen to find the line for his first try after multiple try set-ups.

The next to get on the scoreboard for Storm was Tom Eisenhuth after a 100 metre advance. An offload from Hynes in his own dead ball zone found Hughes with pace and space. Tackled on the was half way line, Storm worked the ball up to five metres away on the next phase, with quick dart from Eisenhuth then finding the paint.

In the end, the final word on the day came from the Warriors with the second try of the game for Maumalo. With an overlap presenting itself, the Warriors line shifted the ball quickly to find their soon to leave winger on the side line. Another acrobatic leap was needed from Maumalo to ensure the side line was avoided.

With less than a minute to go, Maumolo completed his hat-trick with a third try to bring back some pride at the game’s conclusion. It was his most impressive dive of the afternoon, this time placing the ball down just before being tackled out of play.

The siren followed Nikorima’s successful conversion to commit the final score at 16 – 42. It was a disappointing game for the Warriors, but one with a few complimentary moments to take away – especially for Maumalo who can now leave the club with his head held high.

The Warriors will next face the Newcastle Jets in Round 15 at McDonald Jones Stadium, on Saturday, June 19.