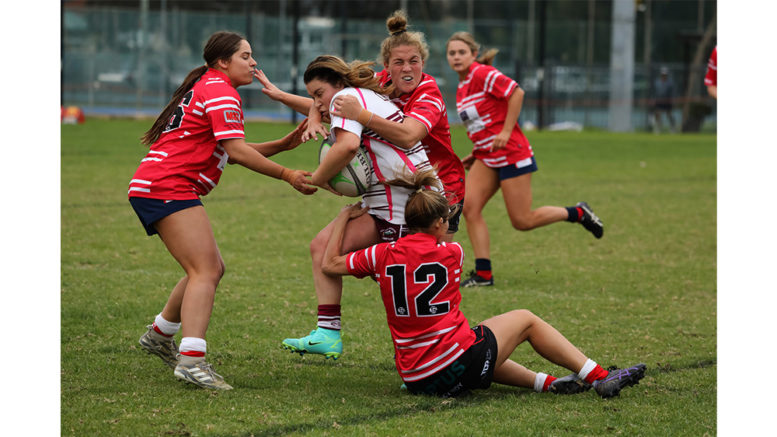 In the Women Tens Rugby conference, Gosford-Woy Woy have won two games in a row to establish themselves as third on the table and one point below Terrigal in second.

The first win came on Saturday, May 22, in a convincing showing against Hornsby that ended 55 – 10.

Travelling down the M1 for a spirited clash against the Nalas, Gosford/Woy Woy were pumped for the win after suffering their season’s first loss the week before against first place Avoca Beach.

The Nalas knew what was coming from the reputation that surrounds Gosford/Woy Woy: they play hard, fast and fair rugby.

It was an entertaining game that highlighted the strong abilities of both sides, particularly in the breakdown where clutch turnovers were made from each team.

It was Gosford/Woy Woy that dominated the game, scoring spectacular tries all over the field and exhibiting a speed and agility that proved too much for the hosts to handle.

With this win secured, the Gosford/Woy Woy team then headed to Kariong on Saturday, May 29, to keep their positive momentum moving.

In this match, another dominant win was settled at 48 – 10, securing another bonus point for the Peninsula side to position them one more win away from overtaking Terrigal on the ladder.

Their opportunity to do this will come straight away in their next league game on June 5, against Terrigal, away at The Haven Oval.

Meanwhile, some stumbles are being experienced by the Woy Woy Lions Men’s team in the Swietelsky Premier One, after two more losses have been suffered this fortnight.

The most recent loss was a close match against Kariong in a hard fought encounter that ended 48 – 19.

In this game, Kariong got away to a great start with several early tries to secure a scoreboard lead that lasted the whole 80 minutes.

With an unanswered 19 point lead, the Lions responded with a converted try, but conceded one more to go into half time behind by 26 – 7.

With this handy lead for Kariong, a stronger showing in the second half by the Lions was not enough to upset the end result for the hosts.

The win places Kariong in second spot on the ladder in what is proving one of their best seasons in years.

For Woy Woy, two losses in a row has seen them drop to second last on the table and 12 points behind league leader, Terrigal.

Along with their women’s team, the Lions will face Terrigal in this weekend’s match that threatens to be an immense challenge for the visitors.

Nonetheless, Woy Woy have proven their ability to score tries and win games this season, more so than last season, and not even Terrigal can boast of a perfect record in 2021.

Throw in a distinct rivalry between these two southern Central Coast sides and you have a recipe for a brilliant game.

Along with the Men’s Premier Two and President’s Cup games, The Haven Oval will be host to a grand day of rugby on Saturday, June 5.