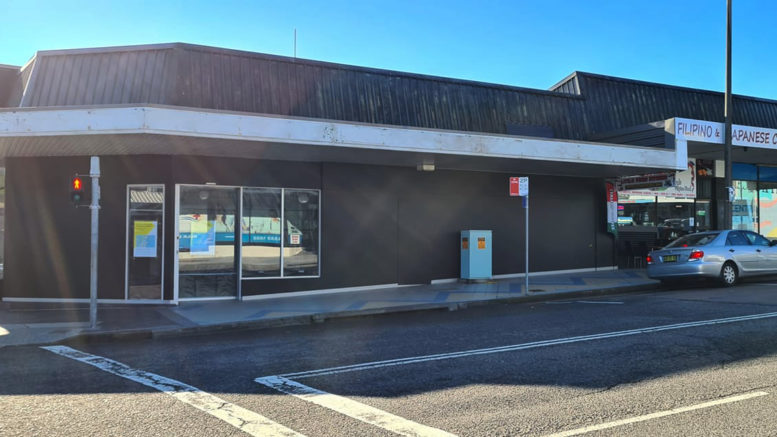 The CBA moves out and leaves an ugly, re-painted empty building

After more than a year of uncertainty for the community, the Commonwealth Bank (CBA) at The Entrance has permanently closed.

The windows have been covered, the building re-painted black, the ATM has gone and there’s no sign the bank was ever there, except a poster saying where the closest branches are at Bateau Bay, Tuggerah, Lake Haven and Erina.

The Australia Post office, just a few shops away, is an alternative where CBA customers can make withdrawals, deposits and bill payments.

In May 2020, CBA announced it would temporarily close for about six months and staff were seconded to the bank’s call centre to cope with the huge influx of customer inquiries through the COVID-19 crisis.

A CBA spokesperson said the coronavirus pandemic had accelerated a continuing shift in banking behaviour, with a significant portion of customers seeking assistance through call centres, about one million a month.

Since then, The Entrance MP, David Mehan, has waged a campaign to have the bank re-opened after its six-month “temporary” closure, but CBA did not commit to a re-opening date.

“It’s really disappointing there are no banks left in The Entrance, although we do have a Building Society Greater Bank, which is the only face-to-face banking option available, other than the Post Office,” Mehan said.

“The Commonwealth Bank has also withdrawn its ATM and that was an important service because there’s still a lot of businesses around here that bank with cash and it had a depositing service, but now that’s been ripped out.

“Even though you can do your everyday banking at the Post Office, those other banking services and being able to talk to someone about your account has been removed from the area and that’s a real disappointment.

“I’d question the amount of notice the bank gave to the community.

“I think there were other options open to them, they could have reduced their opening hours, they could have at least left the ATM with its depositing service, which was a good service to the community.

“It just shows how they feel about small towns like The Entrance,” Mehan said.

Regional General Manager, Norm Swift, said following a recent review, the difficult decision was made to permanently close The Entrance branch on June 3.

“This branch has had a 46 percent drop in transactions over the past five years,” he said.

“There are no job losses as a result of this decision,” Swift said.

He said the bank recognised that some senior customers preferred to do their banking face-to-face and they still had access to over-the counter service at other branches as well as the Post Office a few doors away,” Swift said.