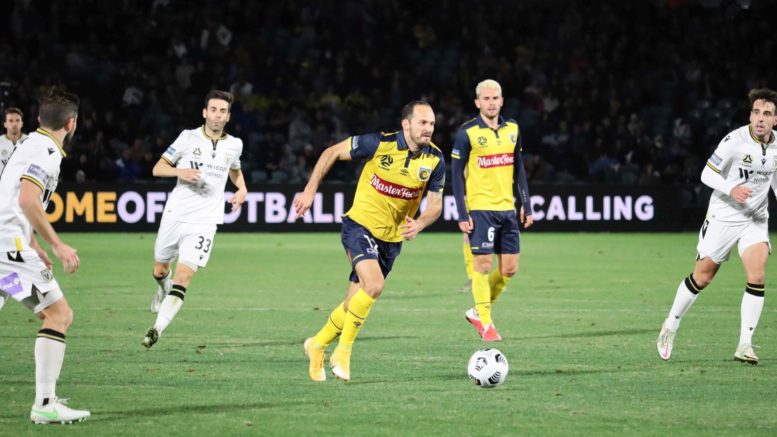 The Mariners season has come to a heart-wrenching end in the A-League elimination final against the Macarthur Bulls on Saturday evening (June 12) at Central Coast Stadium. Before a packed and very energetic home crowd, the Mariners went down 0-2 after the match was locked 0-0 at the end of 90 minutes.

The home team started favourites after defeating Macarthur three times this season, but were missing captain, Oliver Bozanic through injury, while the Bulls were boosted by the return of star striker Matt Derbyshire and midfield ace Beñat Etxebarria.

The first half was dominated early by Macarthur with the Mariners preferring to defend their half of the pitch and launch quick counterattacks against the press. Derbyshire found the net early for the Bulls with a deft lob over the head of Mariners keeper, Mark Birighitti, but was judged off-side.

It then took a miraculous save from Birighitti shortly thereafter to again deny Macarthur an early lead. Having not conceded a goal from a corner all season, the Mariners were peppered with a series of corners at the northern end of the ground, but their defensive structure remained solid. In a late, first half opportunity for the Mariners, Marcus Ureña narrowly missed with a strike from the edge of the box and the teams went into the first break nil-all.

The second half saw a different complexion come over the match. The Mariners lifted the tempo, led strongly by a powerful midfield display from Gianni Stessness who repeated turned the ball over for the Mariners and led several incisive attacks into the Bulls’ danger zone where Mariners front three probed the defence.

The crowd found its voice, the band played and the call of the yellow army echoed around the stands in anticipation. But the all-important goal never came.

In a critical moment, Daniel Bouman had a goal disallowed in the 56th minute after being ruled off-side despite the through ball being deflected off what appeared to be a deliberate strike from the Bulls’ defender. (The VAR upheld the on-field decision.)

A 60 minute through-ball from Nigro was a touch too heavy for Ureña to reach and when he was then dragged down by James Meredith in the 75th minute, earning the Bulls defender a red card, Danny De Silva’s sprayed the free kick wildly over the cross bar.

And so, the first 90 minutes ended scoreless and a further two 15-minute periods of extra time was added. Down to 10 men, it was just three minutes into the first period of extra time when Charles M’Mombwa struck the decisive blow for the Bulls.

A cross from the corner found Markel Suseata with room inside the box. His strike hit the post, but M’Mombwa was on hand to head the rebound past Birghitti and a final desperate kick from Stefan Nigro to put the Bull 1-0 up.

The Mariners searched desperately for the next 25 minutes for an equaliser, but Macarthur were equal to the task, before Michael Ruhs sealed the win with a second goal in the dying seconds of the match.

Macarthur will now face Melbourne City in the semi-final, while the Mariners, gallant to the last blue and yellow moment, were left to reflect on a season that marked a major revival in the club’s standings, but one that so nearly brought so much more.

Council Public Inquiry hearings over but no timeframe for report