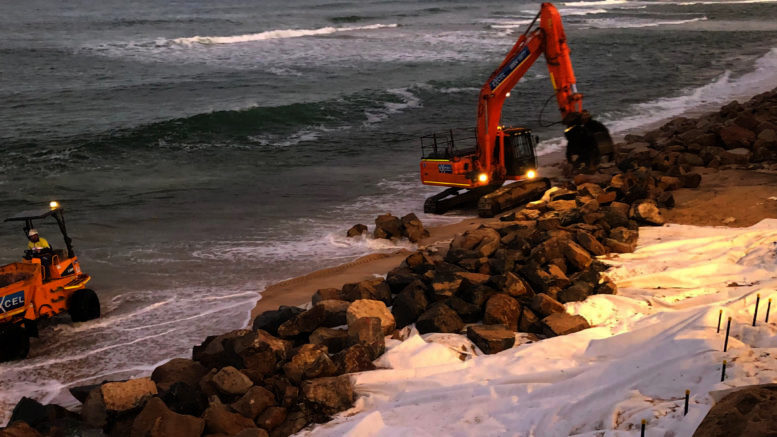 Erosion work earlier this year at The Entrance North

With Central Coast Council still footing a bill of almost $1.9M for erosion mitigation works at The Entrance North and Wamberal, NSW Labor is demanding that the State Government explain why it has short changed councils desperate to fix and improve waterways.

Labor says that a $72.7M funding pool was allocated to provide grants under the Coastal and Estuary Grant Program from 2016/17 through to 2020/21, but a Freedom of Information request has revealed that just over $38M was allocated, with the funding period set to expire at the end of June.

Shadow Minister for Local Government, Greg Warren, said that he couldn’t understand why the government had denied funding to communities that had been impacted by erosion and other serious waterway issues.

“Councils like Central Coast and Newcastle have had to beg for funding relief to assist communities that were severely affected by erosion,” he said.

“It beggars belief that funding was there to help these communities yet the government did everything it could to avoid handing over the money.

“The Minister for Local Government needs to explain why so many councils have been denied vital funding.”

Shadow Minister for the Environment and Heritage, Kate Washington, said the state had coastlines washing away.

“We have houses hanging from cliffs, and councils are desperate for more resources,” she said.

“The Government has already committed this funding.

“They’ve made the announcement, they’ve asked for the kudos, but then they refuse to spend the money.

“The problem hasn’t gone away, if anything, it’s getting worse.

“These communities deserve the money they’ve been promised.”

A Central Coast Council spokesperson confirmed that Council was required to complete emergency works at The Entrance North and Wamberal beaches at a total cost of $2.9M following severe storms in July 2020, under the direction of the Local Emergency Operations Controller (LEOCON), appointed by the NSW Government.

“As per advice, Council sought reimbursement of costs through the NSW Coast and Estuary Grant program and had submitted grant applications for both The Entrance North and Wamberal, seeking 50 percent reimbursement (the maximum available) in October 2020,” the spokesperson said.

“In November 2020, Council received notification that the grant application for Wamberal had been successful with up to $992,501 of funding made available, however, the application for The Entrance North had been unsuccessful.

“This has left $1,894,139 remaining unfunded and presently to be incurred at the cost of Council.

“Whilst the Coastal Zone Management Plan that covers The Entrance North was never certified, it was submitted to the NSW Government for certification four times between 2011 and 2018.

“Council also received advice from Resilience NSW on December 10, 2020, that they were not aware of any other State or Commonwealth funding available under the Emergency Management Arrangements for reimbursement of the costs to implement the LEOCON’s direction.”

On February 3, 2021, the then Administrator, Dick Persson, announced that he would write to the NSW Premier and seek her assistance in obtaining more funding.

“The work undertaken by Council during this emergency was under the direction of the Local Emergency Operations Controller as appointed by the NSW Government,” Persson said at the time.

“I will be writing to the Premier to highlight the need for the state to work with local government and to assist with the costs required during such emergencies and will also be raising it with our Parliamentary Secretary for Central Coast, Adam Crouch.

“It’s important to note, that while the Coastal Zone Management Plan that covers The Entrance North was never certified, it was in fact submitted to the NSW Government for certification four times between 2011 and 2018.

“The works undertaken during the emergency were not reliant on the actions in these management plans, and I see no reason why the funding should be reliant on these either.”

Council has not revealed details of any response to Persson’s letter to the Premier.

Coal mine approved despite risk to Coast’s drinking water supply