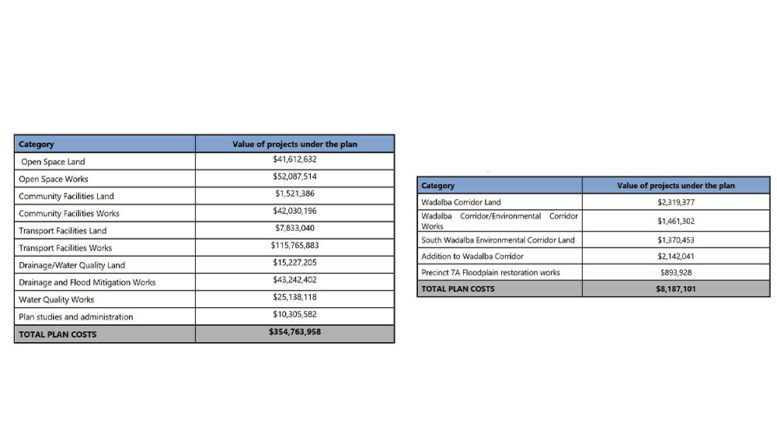 The Warnervale district is the fastest growing area on the Central Coast as it transitions from a semi-rural district to an urban residential and employment hub.

It is expected that by 2036, there will be about 12,000 new dwellings for more than 36,200 people and it is estimated that it will cost about $354.7M for infrastructure to accommodate the population boom.

For most of the infrastructure, Central Coast Council is funding the full cost from developer contributions, which means that when land is subdivided or built on, a contribution is charged so new services can be provided.

Developers are often required to contribute towards the construction of new public infrastructure, such as roads, stormwater and drainage which could include constructed wetlands, shared pathways, parks and playing fields, environmental lands, floodplain restoration and recreational facilities that are needed to support increased development in the area.

Contributions could be in the form of cash payments, transfer or dedication of land such as land for a new park, works-in-kind or the provision of public amenities or services.

The NSW Government sets the legislation and policy framework for how Council collects and administers developer contributions, which are governed by Section 7.11 of the Environmental Planning and Assessment Act 1979.

It determines what local infrastructure is required based on population growth, how contributions are calculated and how they will be managed, taking into account inflation rates, as well as financial input from the state government.

The levies do not apply to infrastructure provided by the State Government or Council, such as drainage, water quality works, utilities, open space, community facilities or transport infrastructure.

Council has now released its updated draft Warnervale District Contributions Plan 2021 which has been prepared to ensure that future growth in the Warnervale district is supported by community infrastructure.

The Plan covers how development contributions are levied in the Warnervale district, updates land valuations and reviews community infrastructure projects to be delivered.

It applies to the suburbs of Warnervale, Woongarrah, Hamlyn Terrace, Wadalba, Halloran and parts of Wyong, Jilliby, Kanwal and Wallarah.

The Plan also includes anticipated facilities for South Wadalba and the Bruce Cr Precinct when it is rezoned in the future for urban development.

It doesn’t include drainage or water quality infrastructure contributions for West Warnervale, which includes Bruce Cr and other Wyong Employment Zone land, because the needs have not yet been scoped or costed.

The draft Warnervale District Contributions Plan 2021 sets out in detail how development contributions are calculated, to what types of developments they apply, how the levies are administered and on what projects, and where, the money will be spent.

The technical document attached to the Plan goes through comprehensive strategies, the progress of projects already underway and forecasts for future community requirements.

These include topics such as open space recreation and community facilities (with notables being the northern indoor recreation and aquatic centre and the Warnervale multipurpose Smart Hub); roads and transport; drainage, flood mitigation and water quality (with particular relevance to Porters Creek Wetland); a works schedule for parks and reserves; an itemised roadworks plan, a drainage plan, and projects of environmental benefit such as Wadalba wildlife corridor.

The Plan, which was publicly exhibited in November and December 2020, has since been reviewed and is now on exhibition for final community feedback until June 25.