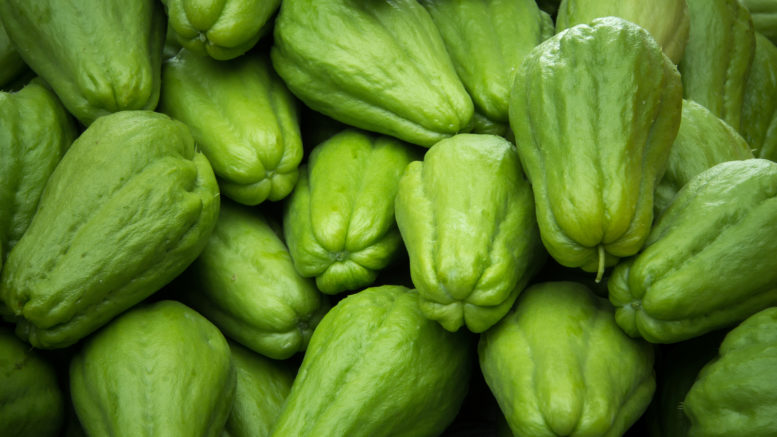 Did you know chokos have enjoyed a great season here on the coast? Possibly not. I’ve been revelling in them this year and managed to come up with a delicious, easy choko recipe that will impress any skeptic. If you love miso eggplant, I promise this isn’t far behind.

Granted, it won’t be featuring in any ‘world’s sexiest vegetable’ lists any time soon, but I think the choko is sorely underrated and deserves a more prolific renaissance than it’s had in recent years. This was a commonly consumed fruit only one generation ago in Australia – why has it fallen out of favour?

Perhaps it’s the urban legends dubbing it a cheap, subpar ‘filler’ substitute for apples – in McDonalds apple pie, for example.

Many a grandma was known to bulk out her best stews and pies with chokos as they are cheap as chips and incredibly versatile, taking on the flavour of whatever they’re cooked with.

The vine is an extremely hardy perennial – one that’s easy to propagate and grow at home. They’re rarely attacked by pests and provide a huge, abundant crop from each plant (often upwards of 50 fruit)!

The fruit are also very inexpensive to buy. I’ve been buying two big locally grown chokos for only $1.40 for the past few weeks from the gorgeous girls at Nurtured Earth.

If you do have access to a vine, it’s not only the choko fruit that can be eaten, but in fact, every single part of the plant is edible and highly nutritious.

The seeds, stems and leaves have been shown in the literature to be bursting with powerful antimicrobial compounds, making it a great functional food to be consuming at this time of year as we head into flu season. The fruit itself is rich in a range of antioxidant phytochemicals as well as micronutrients like vitamin C and folate.

Even the starchy roots can be harvested and cooked like other root vegetables!

Well, let’s be honest: not much.

Its flavour and texture is reminiscent of zucchini when cooked and when including the younger fruits raw in salads, it can be quite sweet, crisp and juicy – more like a cucumber.

As with many nutritious, inexpensive foods – it needs to be jazzed up in the kitchen before it can really be appreciated.

How to use it

The best fruits are the younger ones, which admittedly are harvested a bit earlier in the season – I’m coming to you a tad late this year. The bigger, more mature fruits have a much tougher skin and the astringent sap that lies directly beneath it becomes more abundant as they age, making them slightly harder to peel.

Peeling them is mildly annoying at the best of times. So, unless I’m adding tender young chokos into salads (which only happens at the beginning of the season in early Autumn), I tend to cook them first and slice the skin off afterwards – or simply eat around them.

That said, the skin is edible – just a bit tough. However, if you’re baking or roasting it first, as we are in this recipe, it softens substantially and can enjoyed much like the roasted skin of butternut pumpkin.

What I love about chokos is that they are actually quite versatile in a culinary sense and can be eaten in a number of ways, including:

• Pickled in wedges or diced into chutneys

• Added to soups (chunky or blended)

• Chopped or diced into stirfries

• Included in a raw vegetable juice

• Steamed, then smeared with butter and salt

• Roasted with olive oil or butter and salt

• The leaves steeped into an antimicrobial tea

• The seeds sliced and included in stirfries

It’s possible to be allergic to the fruit and the sap in older fruits can be a mild skin irritant to those with sensitive skin so it’s always best to wash your hands if you’ve gone to the effort of peeling them.

Now, on to my latest discovery! Choko is a superstar substitute in the delicious traditional Japanese dish that is miso-glazed eggplant. Anything that helps me dodge the chore of peeling them is a winner, but as anyone who relishes the regular version of this dish will know, it’s jam-packed with flavour. Something our humble little choko really calls for.

With only three ingredients in the glaze, this is such a quick and easy side dish to whip up without much effort.

This choko recipe is next level with toasted sesame oil, but if you don’t have any on hand, I’ve also made it with olive oil and it’s still pretty delicious.

Sesame oil for cooking (or olive)

1 tbsp maple syrup (you can sub honey, but not quite as nice)

2. Slice the choko in half lengthways and remove the seed. Then slice each half into four long wedges, so you have eight total, roughly the same size.

3. Toss them in a drizzle of sesame or olive oil and a small pinch of salt (don’t overdo it as the glaze is salty enough), then lay them on a baking tray.

4. Place the tray in the oven and check them at the 20 minute mark. Depending on your oven, you may need to flip them over at this point if they’re browning to quickly on the underside.

5. Cook them for an additional 15 minutes or so, until they’re cooked through, then smear the glaze over each piece – as if you’re spreading peanut butter on toast. It’s best to try and keep it off the pan if you can as being so high in sugar, it has the tendency to burn. The glaze is usually thick enough to stay put.

6. Bake for another 5-10 minutes, ensuring it doesn’t burn, then take them out and enjoy once they’ve cooled slightly.

Well, I hope you enjoy this simple choko recipe. Come back same time, next year and I’ll have a delicious choko salad waiting for you.

The untold benefits of seasonal eating

A Winter guide to what’s in season