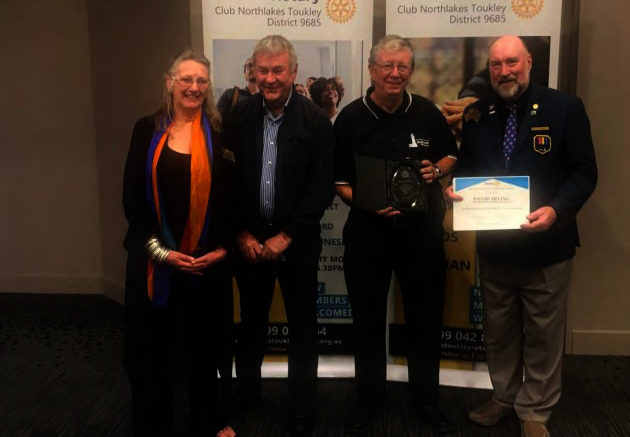 Rotary President, Jan Pryor said that Irving, like all other recipients of the award in past years, was nominated by an organisation for their volunteer work.

“Neville Royal was a very dedicated Rotarian, and he introduced the award,” she said.

“He sadly passed away last year.

“As part of the award, our club donates $500 to the charity of the recipient’s choice and past recipients have been marine rescuers and surf lifesaving volunteers,” Pryor said.

Chair of Norah Head Lighthouse Land Manager Board, Neil Rose, said it would be hard to find anyone who was more passionate than David Irving about the lighthouse reserve.

He was an electrical engineer in a previous life, working initially for Sydney Water before moving to Budgewoi in 2003 to take up a position at the former Wyong Shire Council.

He started as a maintenance volunteer in 2017 and in early 2018 switched to be a tour guide, a vocation he loved.

On March 23, 2018, Irving was appointed to the Norah Head Lighthouse Reserve Trust (now the Land Manager Board) and was elected Secretary at the initial meeting of the new Trust.

“As Secretary, David worked tirelessly for the Board, bringing to bear his skills in report writing, financial analysis and information management,” Rose said.

“Thanks to David, the lighthouse tower has never looked better.

“He has been extremely disappointed that the tours have been cancelled due to COVID-19 and hence no visitors to admire how good the tower looks now,” Rose said.

The loss of the lighthouse tower tours due to COVID-19 smashed the Reserve’s income by about 30 percent.

Irving, with tour guides Ken and Cheryl Greenwald, got their heads together and decided to open a small gift and snack shop to assist fill this revenue loss.

“That is where you would find David most weekends, selling ice creams, bottles of water, other cold drinks and souvenirs,” Rose said.

“He recently resigned from the Land Manager Board and will be sorely missed by the Board and all the friends he has made through volunteering,” he said

“Although he was with us for only a few short years, David did more than his fair share.

“The Board wishes to publicly thank him for all his hard work, friendship and guidance that he has provided us with,” Rose said.

Planning Panel to decide on development recommended for refusal