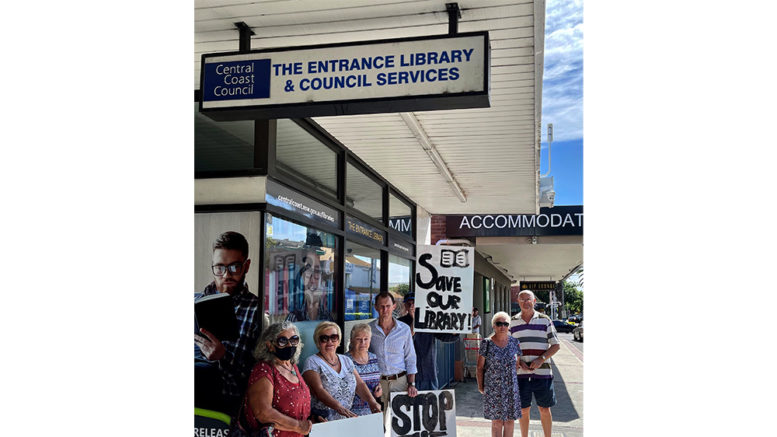 A strong community campaign could not save the library

“No change to the draft plan” was the standard reply to people’s submissions to Central Coast Council’s Operational Plan, or Budget, for the 2021-22 financial year.

A Summary of Submissions at Council’s meeting on Tuesday, June 29, said 140 submissions were received and of the 34 topics, Council made only four amendments to the Operational Plan.

Some of the decisions Council would not budge on included a five percent increase in sports fees, an increase in childcare fees, more money for implementation of Norah Head Masterplan and closure of The Entrance library.

Objections to the closure of the library included a petition signed by 1,106 people but Council said it counted it as one submission.

In its response to submissions, Council said patronage of The Entrance Library had declined greatly over recent years and the ageing premises were not suitable to meet the needs of a modern library or that of an inclusive community facility due to lack of accessibility, parking or space for collaboration.

The library is to be replaced with a visiting mobile library service.

Council’s customer service point, available on Thursdays and Fridays, will be relocated to the Visitor Information Centre.

Investigations are also underway on the possibility of making public access computers available at the information centre.

Although The Entrance library will close, Council has increased its 2021-22 capital budget by $73,000 for library resources.

“This will not impact Council’s overall Budget and is a result of the re-allocation of funds within the Libraries and Education Unit,” Council said.

The Entrance MP, who led the community campaign to save the library, said Council ignored 55 submissions and two petitions opposing the closure.

“The only concession in relation to libraries is a $73,000 increase to library resources but this is only due to lower than expected costs of other library upgrades such as a new return chute for Toukley and air conditioning at Tuggerah,” he said.

Meanwhile, Council has told local sporting bodies facing a five percent fee rise that there would be no change to the draft plan.

Council says the Community Sport Hire fees have been increased by five percent in 2021-22 due to nil increase or reduced fees over previous years, reducing the minimal subsidy the sporting community provides towards the full cost of maintenance and operation of sporting facilities.

Representatives of Central Coast Sports Council met with the Administrator and Council staff to discuss lighting fees and sports fees in general.

The Administrator informed the Sports Council that Central Coast Council fees were lower than many other councils’ and there would be no changes.

“Whilst there is a proposed five percent increase, the fees for 2021-22 have been benchmarked against other surrounding local government areas and are considered reasonable and fair,” a Council report said.

Business people were the one group that did get a change to the Operational Plan, following submissions about the impact of the Special Rate Variation on the business rates category.

Council changed the rating for the business sub-category of Major Retail.

The sub-category has been re-based against the Ordinary Business Rate, providing better equity across all the business categories, Council said.

The 2021-22 Operational Plan which includes the 15 percent rates rise and rates harmonisation, the fees and charges schedule, financial income and expenditure, as well as the four-year Capital Works Program, takes effect from Thursday, July 1.

Review of The Entrance Management Policies and Practices to be adopted