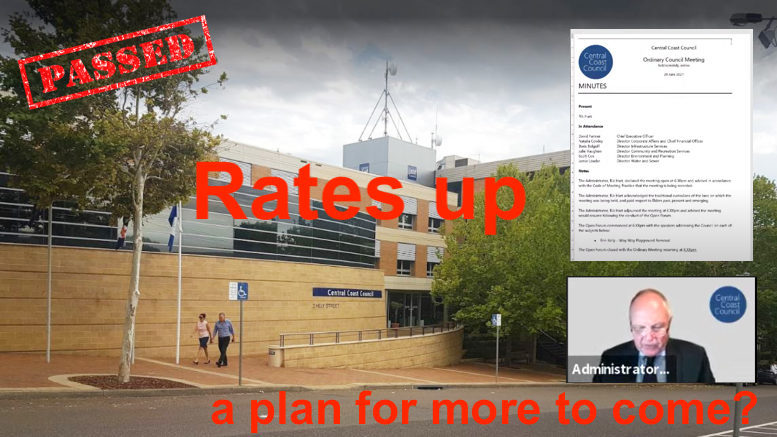 A 15% rate increase has been passed by council's Administrator.

Central Coast Council has officially rubber stamped its plans to increase rates by 15 per cent and introduce harmonisation of the rates. And it has flagged plans to try to make the rate increase permanent.

When accepting the Council’s need for a special rate variation (SRV) the Independent Pricing and Regulatory Tribunal (IPART) only allowed the increase for three years.

The meeting to adopt the rate rise – and the harmonising of the rates between the former Wyong and Gosford areas  – was held on Tuesday, June 29.

The council also adopted its operational plan and budget at the same meeting.

In the operational plan, the council explained it will need to apply to the IPART for a further rate rise or special rate variation as it is called.

Council says it may resolve “at a future point in time” to apply once again for a special rate variation for the 2024-25 financial year and onwards.

“It should be noted that whilst the approved SRV (special rate variation) provides Council short term stability for three years, it does not provide for long term financial sustainability beyond 2024-2025 and a further SRV will be required.”

Adopting the plan enabled the Council to levy rates and charges prior to July 31.

“If rates and charges are levied and notices issued by 31 July 2021 then the first quarterly instalments will be due 31 August 2021,” Council said.

The amount by which a rate payers rates will change will depend on two factors, the land value (as determined by the NSW Valuer General) and whether the property is in the former Wyong shire or former Gosford city council area.

In May, IPART approved a rate peg increase of 2% for 2021-22 and a temporary one-off 13% increase to council’s rating income for three years.

Fees and charges went up with the adoption of the plan.

Local sporting bodies tried without success to stop a five per cent increase in fees.

Council said the Administrator Rik Hart informed the Central Coast Sports Council representatives that Central Coast Council fees were lower than many other Council’s and there would be no changes to the way the fees are administered.

“Whilst there is a proposed 5% increase, the proposed fees for 2021-22 have been benchmarked against other surrounding LGAs and are considered reasonable and fair,” the report said.

Council also declined to adopt its Greener Places Strategy as requested during the public exhibition period of the plan.

Council said the strategy had been due for adoption but its budget and resources had been allocated to higher priority projects.

The Wyong Town Centre Structure Plan has been removed from the operational plan, another victim of other priority projects needing to be delivered within budget and resources.

And The Entrance Library closure will go ahead.

The revenue from Annual Waste charges is estimated to be $81M.

The operational plan explains that Council’s external loan balances are forecast to be $347M at June 30.

The report also says that “cost shifting continues to place a significant burden on Council’s financial situation, to the tune of approximately $45 million per annum”.

Council expects its deficit at the end of this financial year will be $103M or less,, down from $115M first projected in the first quarter of this year.

Next year’s budget projects a modest surplus of $7M with a capital works program of $175M.

At the same meeting, the May investment reports showed Council’s current cash and investment portfolio totals $483.01 million at May 31.

The portfolio earned $408k in interest.

A total of $430M were restricted funds and $52.2M was unrestricted.