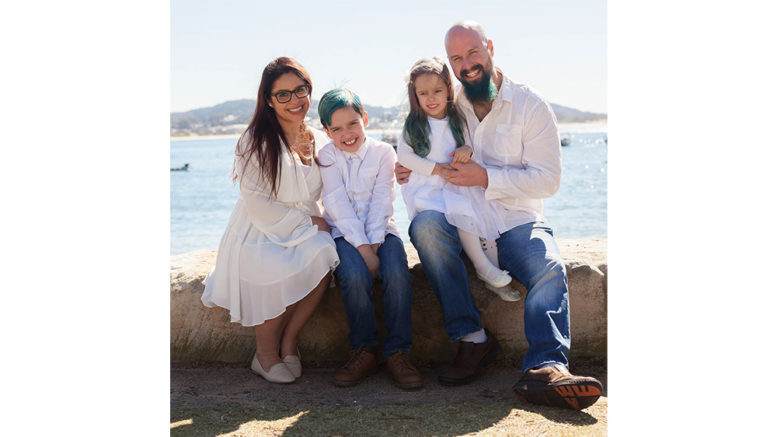 Claudia Hobday from Wyoming was one of many around Australia who helped to help raise awareness around Neurofibromatosis (NF) in May.

Across the month, the Children’s Tumour Foundation (CTF) ran the campaign, NF Out of the Shadows, which encouraged those suffering from the disease to come out and share their story.

NF is a lifelong genetic condition that causes tumours to form on nerves in the body, including the brain and spine.

Progressive and unpredictable, NF can also cause cancer, blindness, deafness, as well as physical differences, learning difficulties and chronic pain.

It is impossible to predict how mild or severe the visible and invisible impact of NF will be on a patient, as every person’s experience is different and over half of all cases begin in families with no history of the condition.

Hobday has been living with NF her whole life but only found out when her daughter Zoe was diagnosed after her fourth birthday.

“After a day of celebrations, I had tucked the children into bed and looked through the photos I had taken that day.

“I noticed in every photo her left eye seemed crossed.

“I dismissed it and thought she was probably just excited and tired.

“My husband Ben and I monitored her eyes over the next couple of days, then decided to make an appointment to have them tested.”

Following this appointment, they booked their son, Arthur, into an eye appointment and then took Zoe to see a paediatric ophthalmologist in Sydney.

Hobday said having never heard of NF she was not prepared for the news they got next.

“After hours of seemingly benign tests, I was completely unprepared for what was to come next.

“We were advised to go straight to the Children’s Hospital for an MRI of Zoe’s head as she suspected something was pushing up against her eye.

“The ophthalmologist called the emergency department herself and handed me a referral with instructions to have Zoe start fasting.”

“When we finally got to hospital, Zoe was seen by several doctors including the emergency department doctor, an eye doctor, neurologist and an oncologist.

“We were exhausted, hungry and thirsty.

“At 8pm, we were told they suspected Zoe has NF1 and that possibly, I have it too.”

“Zoe was admitted and an MRI scheduled for the following morning.

“[My husband] Ben had flown back from Melbourne to meet us at the hospital in time to be told she had an Optic Pathway Glioma.

“The Neurologist came back to see us the following day and diagnosed both Zoe and I with NF1 and suggested Arthur come and see him to be assessed too.

“Just three weeks after her diagnosis, Zoe started chemotherapy as a second MRI showed that her OPG had already grown.

“There was no “watching and waiting”, just treatment.”

After these events, Hobday started looking back on her own life and understanding how she had been affected by the disease.

“In 2017, I had discovered a lump in my left breast but was told it was nothing serious.

“In August 2019, another lump appeared in my right breast.

“Considering my NF diagnosis, I had a scan and two biopsies to check for malignancies.

“I was told that they were intraductal papilloma and I had the lumps surgically removed.

“In March 2020, I feel another lump in my left breast, but after having both breasts scanned, discovered another in my right too.

“Once again these were biopsied, and I was told that they were intraductal papilloma.

“The following month I had them surgically removed as a precaution.

“We are now monitoring Zoe with regular MRIs and eye appointments every three months.”

Every day, Hobday said they find out new things about NF, and she hopes that sharing her story will help others come forward if they need help.

“What was initially quite overwhelming has simply become a part of who we are now, but that does not mean we are not vigilant of how quickly things can change.”

NF affects one in every 2,500 adults and children, and on average, every three days a child is born with NF in Australia.