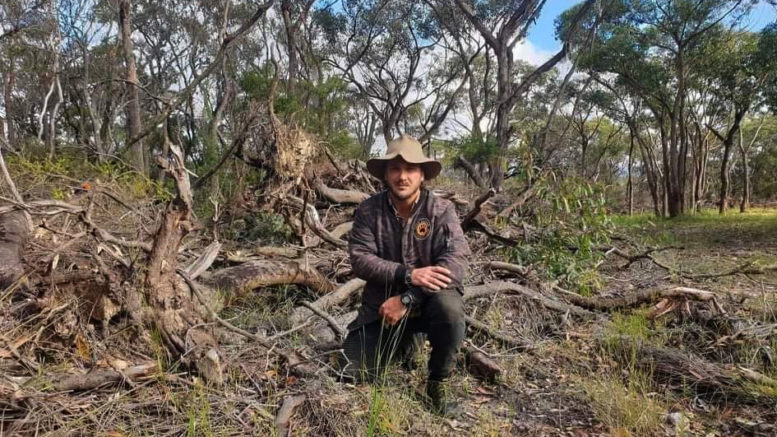 Jake Cassar at the site of the illegal clearing

Coast Environmental Alliance (CEA) has labelled a decision by Central Coast Council not to prosecute following the illegal clearing of environmentally sensitive bushland at Kariong in 2020 “a devastating blow for conservation”.

On July 8, 2020, 5.2 acres of bushland, on a site owned by the Darkinjung Local Aboriginal Land Council (DLALC) on Woy Woy Rd which is slated for a 70-house development, was illegally cleared by an individual.

The carnage was first discovered by CEA founder, Jake Cassar, who confronted the man who said he had cleared the land with a tractor for a fire break.

Central Coast Council and the Department of Planning, Industry and Environment (DPIE) initiated investigations into the event, as did DLALC, which made it clear at the time that it had “at no time” authorised “any internal or external party to begin land clearing at this site”.

CEA has been pushing for answers ever since and has now obtained documents under the Government Information (Public Access) Act 2009 (GIPA), which confirm Council has issued a $3,000 penalty but has declined to pursue prosecution.

Cassar said Council had offered no reason for its decision, with the land Federally listed as an Area of Regional Koala Significance (ARKS).

“Council didn’t even interview me regarding the illegal clearing, which I discovered, nor did they speak with me about the video I shot which I streamed live to Facebook,” he said.

“This course of action by Council seems more aligned with fining someone for cutting a few trees down to improve their view.

“Similar cases have seen massive fines issued, and those found guilty ordered to regenerate the land at their own cost.

“This individual has caused absolute carnage in an area with endangered flora and fauna and cultural heritage, cut down hundreds of trees, and has barely been given a slap on the wrist.”

Cassar said he was awaiting the results of the DPIE investigation.

“This block of land adjoins Kariong Sacred Lands, an area which is world renowned for having many and diverse examples of Aboriginal occupation and cultural uses,” Howie said.

“It is completely unacceptable to us that Council hasn’t pursued further action.”

The development proposal for the 13.2ha DLALC site, which includes the illegally cleared land, has met fierce opposition from CEA and various community members, despite the fact that 7.1ha would remain zoned E2 environmental conservation.

“It’s unacceptable for there to be development on sites like this one, regardless of who owns them,” Howie said.

“This area is a recognised part of a much larger and complex cultural landscape.

“We know that a cultural site was uncovered within the development footprint as recently as 12 months ago.

Cassar said he was “extremely concerned by Council’s decision not to pursue the appropriate channels of land regeneration in this instance”.

“CEA will continue to pursue every avenue we can to ensure that this land and the animals that call it home, receive a fair go and that the legal protection it so rightly deserves is upheld,” he said.

“(We) plan on taking this matter further to ensure that Council doesn’t set a dangerous precedent.”