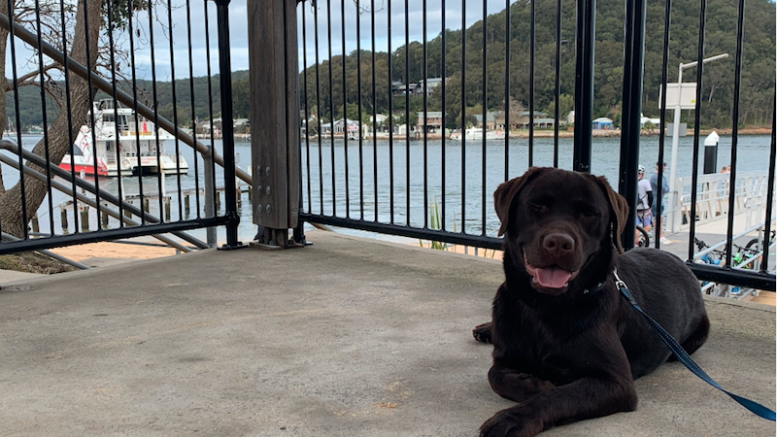 UPDATE: The ferry operators have decided to soften their policy on this issue after a public outcry: The recent announcement that all pets must be in a carrier to travel on the popular Palm Beach to Ettalong ferry has angered some locals who say the ruling is ‘unjustified’.

An announcement from the NRMA-owned Fantasea Cruising last week noted that from July 1, staff would be enforcing the 2017 NSW Passenger Transport Act and its regulations to ensure animals are ‘restrained in a suitable box’.

Animals should not travel in the enclosed ferry cabin areas, and the animal should be kept away from other travelling animals to ensure the safety and comfort of other customers and pets.

It also states the driver or crew may refuse to allow the animal onboard if the service is reaching capacity, or if the pet is on a leash.

Local resident and frequent user of the ferry, Kathy Boland, said she usually takes her daughter’s dog, Cody, over to Palm Beach with no issues.

She said she cannot understand the sudden enforcement of the regulations.

“It feels like the rug has been pulled under us – everyone I speak to about this can’t believe it,” Boland said.

“It’s not a hustle bustle ferry like the Manly one, it’s nice and relaxed, we have dogs and workers on there who sit comfortably next to one another.

“It’s lovely getting on the ferry and seeing the animals on there … it’s lovely for the elderly people to bring their dogs over and visit family.

Boland said due to Cody’s size, she worries she will not be able to take him onboard anymore with the new ruling.

“I’d like to know why this ruling has come in … if they’re worried about other people or biting, asks for dogs to have a muzzle on.”

An Ettalong woman who also frequently uses the ferry with her dogs said she disagreed with the ruling.

“I have a rottweiler and an American staffy … that’s insane!”

She said she had been catching the ferry for over 20 years, regularly visiting her partner who works in North Sydney with their two dogs but will now be unable to.

A spokesperson for Transport for NSW said animals must be restrained in a suitable box, basket or other container at all times whilst on board.

Assistance animals with a valid form of accepted accreditation are exempt from these restrictions.

“This is not a new regulation and the rules have been in place for a number of years,” the spokesperson said.

“It is the responsibility of ferry operators to interpret and administer the regulations.”

The Department notes that these restrictions are for the ‘comfort of other passengers’.

CCN reached out to both Transport for NSW and Fantasea Cruising to ask if there had been any complaints to prompt this enforcement, with both declining to comment.

CCN also asked both parties why the ruling was only being enforced now, were there any exemptions for people unable to carry their animal in a crate, and what were the acceptable parameters around the ‘cleanliness of the animal’ to board the ferry.

A spokesperson for NRMA/Fantasea Cruising said the regulations would be enforced.

“While these regulations are not new, Transport NSW has indicated that they will begin to enforce them from 1 July,” the spokesperson said.

“We have begun communicating this to our staff and to begin notifying customers in advance.”

An online petition has been started to request Transport for NSW to allow the animals to board the ferry without a crate.

Less than 24 hours after its launch, the Change.org petition reportedly had over 200 signatures.