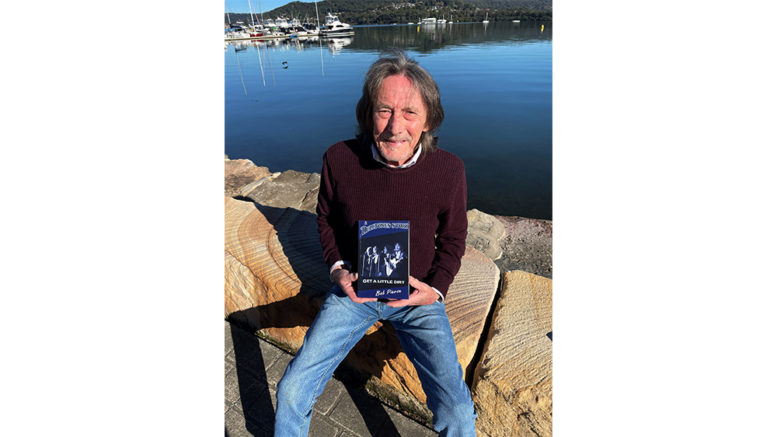 For 13 years, Bob Pierse was a member of iconic Australian rock band The Delltones.

The Narara resident has now released a book outlining his musical career, including those heady days when he was one of the four-member group remembered for its amazing harmonies.

It documents the band’s entire 58-year career in detail.

A Delltones Story-Get A Little Dirt begins with the story of Pierse’s early days, when his band The Nocturnes morphed into Ray Brown and The Whispers.

His next band, The Beaumarks, played the first show to go to Vietnam under the Australian Forces Overseas Fund in late 1965 where, along with Don Lane and Lucky Starr, it performed Christmas shows for the Australian troops.

It was there in February 1966 that he met The Delltones, which led to his joining the group in 1968.

In June 1962, Widerberg died in a car accident and three weeks later the group’s single, Get a Little Dirt on Your Hands, reached the top five on the local charts.

Following several changes to the band’s line up, Pierse and Sep Martin joined original members Perkins and Wilson in 1968 to form a new-look foursome which remained in place until 1981.

“I had always been a fan of the group, so it was fantastic when Sep and I joined the line-up,” he said.

“We had some great years.

“We spent a year in London, toured Europe, did a Baltic cruise to Russia; appeared on Top of the Pops with Jimmy Saville.”

In 1973, The Delltones was the last act to perform before the infamous Whiskey A Go-Go fire in Brisbane.

Pierse welcomed the recent reopening of the inquest into the arson attack, in which 15 people died.

“It’s about time they got to the bottom of it all,” he said.

“I remember we arrived late to the gig after doing another show and after the performance Sep and I were sitting at a table having a drink with a few others at around 2am.

“Brian and Pee Wee had just left the club and Sep and I were doubtful of getting a cab at that hour, so I headed down the stairs to see if they had driven off yet.

“Brian was just coming back up the stairs to make sure we didn’t want a lift – which had never happened before.

“Within seven minutes of the four of us driving away, we were passing fire brigades heading to the nightclub.

“One of the people we had been sitting with died that night.”

Following the fire, the band took a five-year break, during which time Perkins and Wilson bought and operated a rural property.

“They had a disaster with a crop of rockmelons and we all got together and rehearsed and it was just like the old days,” Pierse said.

The line-up continued until 1981, when Pierse and Martin left the band, continuing to work for some time as a duo.

The Delltones continued under different configurations until the band eventually disbanded in 2016.

Pierse’s book has been years in the writing.

“At first I just wanted to document things but then it morphed into a book,” he said.

“A lot of stuff which wasn’t true had been said and I wanted to set things straight.”

Ettalong author’s tale of growing up in New Zealand