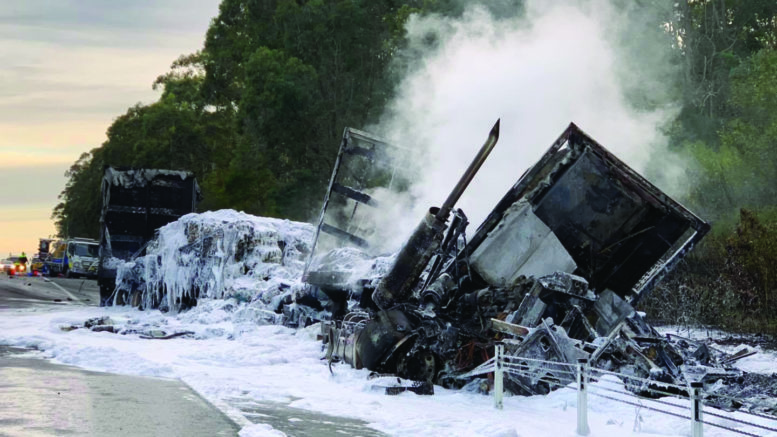 Three road workers were hospitalised after a B-double semi-trailer crashed into two work trucks on the M1 Pacific Motorway in the early hours of Tuesday, June 1.

Emergency services were called to the southbound lanes at Alison at about 4am after the B-double crashed through a work zone and hit a slow-moving Hino truck, causing it to flip and hit a stationary truck, which then hit a road worker.

The B-double was well alight when firefighters arrived but the driver, a 62-year-old man, was able to free himself and escape injury.

Firefighters worked quickly to extinguish the fire and prevent further spread to the surrounding grass areas.

The B-double driver was taken to Gosford Hospital for observation and mandatory tests.

The driver of the Hino work truck, a 43-year-old man, suffered serious injuries.

He was taken to John Hunter Hospital, along with the injured road worker, aged 58.

They both remain in a stable condition.

She was taken to Wyong Hospital suffering shock and was released by early afternoon.

An investigation is underway and any witnesses or anyone with dashcam vision are urged to contact CrimeStoppers.

The southbound lanes of the M1 remained closed with local diversions in place but the accident caused major traffic delays, with cars banked up for many kilometres along the M1.

Other detours around the accident site became clogged with traffic at morning peak hour, stretching as far away as Toukley, San Remo and all around Wyong and Tuggerah.

By 10am all northbound lanes and two southbound lanes were again open, but traffic was still slow while the clean-up and salvage took place.

It was the first night of roadworks planned by Transport for NSW for the coming two weeks, to carry out routine maintenance to the expansion joints on the six bridges over Deep Creek, north of McPherson Rd.