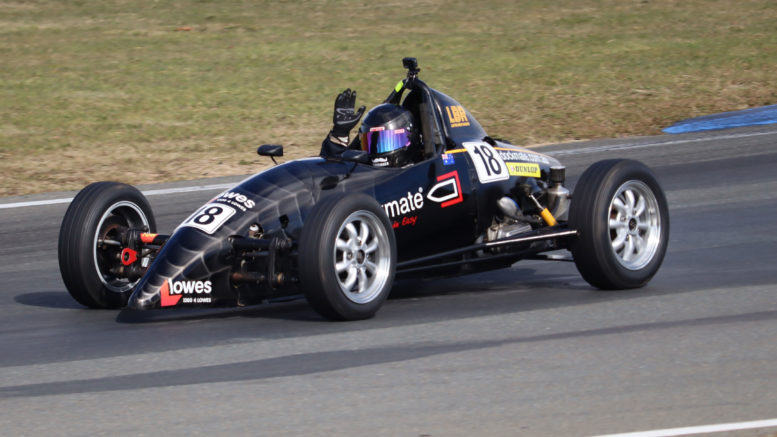 In May, the winter sport season continued on the Central Coast. Meanwhile, local athletes competed in a number of individual sporting competitions. This month, Around the Grounds focuses on one in particular.

Round Three of the NSW Formula Vee Championships went ahead over the weekend from May 22 – 23, with Central Coast local, Paul Lister, representing his fraternal team, Lister Bros Racing. Paul took the time to lift the bonnet on his vehicle and tell us more about this entry level Formula division that sees competitive cars racing from a starting price of $10,000.

Throughout my interview with Paul, he provided more details that may be useful to anyone with further interest in the sport, from how he got involved in the race series to what it’s like out on the track, as well as comments on how others can get involved in the sport.

“My brother and I did a track day at Eastern Creek (Sydney Motorsport Park) in the Formula Fords and V8 cars,” Paul said. “Since we enjoyed it so much, we started looking around for a track car and we saw that the Formula Vee’s are really affordable to get into: you can buy cars from as little as $10,000.

“We first bought the black no.8 car as a track day car. As soon as Formula Vee Races heard we had a Formula Vee they reached out to us, got us into racing, helped us through the process of getting a race license, got us into the grid and we haven’t looked back. We’ve been doing it for about 12 – 18 months now and we’re really enjoying it.

“The NSW Formula Vee Championships is a six round competition, that’s six weekends throughout the year and across each of those weekends there are three races. We started in February of this year, we race between Wakefield Park down near Goulbourn and Sydney Motorsport Park, and we just competed in Round Three on the weekend (May 22 – 23).  As it stands, I’m running fifth overall in Division One and I’m leading Division Two which is for beginner drivers.

“Before I got involved with Formula Vee I hadn’t done any motor racing at all,” continued Paul. “You go through a motorsports license process; as part of that you learn quite a lot around safety, flag marshals and things like that, ahead of an Observe License Test on a track. Once you’ve done this you’re on the track, so you start to experience what it’s like to be close with other cars.

“I think Formula Vee is a great category, they look awesome with the open wheels and the shapes of the bodies. If you want to get involved, it’s the cheapest level of motorsports you can get into. Cars sell from around $10,000 up to $40,000 for the really high tech ones, so you can get into the sport at a decent price.

“If you’re looking to get involved, look at the Formula Vee NSW Association website, where you’ll find a lot of information to introduce you to the sport and also to help get you setup if you want to take that next step. You can also look up teams like Lister Bros Racing, we’re on Facebook and we also have our own website.”

For Paul, Lister Bros Racing and the NSW Formula Vee Championships, Race Day Four is scheduled for June 25 at Sydney Motorsport Park, followed by Round Five at this same venue on July 30. The final round will be at Wakefield Park Raceway on September 24.