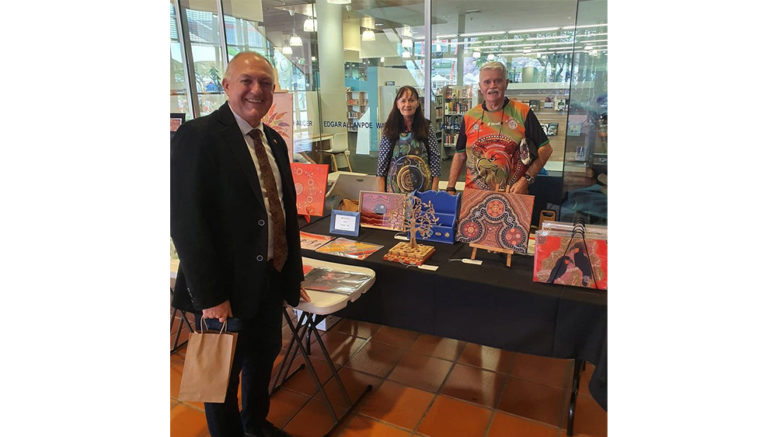 Wyong MP, David Harris, at the Colours of Country market run by Darkinjung artists, with Wendy Pawley and Dal Walters, both of Blue Haven

He also continues as Shadow Minister for Aboriginal Affairs and Treaty.

“I’m pleased to serve in these roles and look forward to advocating on behalf of businesses and individuals who have been hit hard financially by COVID-19 to ensure that they get the support they need,” she said.

Harris is more than happy to take on the Jobs, Investment and Tourism portfolio, to build on work he already started as Shadow Minister for Central Coast.

“Obviously, in this fast-growing region, we can’t keep building new houses and not create jobs to go with that, otherwise we just push more and more people on to the trains and freeway to commute out of the area for work.

“My new portfolio gives me a stronger position to lobby for resources and to make sure that the Central Coast is recognised in its own right as a go-ahead tourism market, opening up more jobs,” he said.

“They’re the sorts of big projects I’ve already been working on and will be pushing further in the Jobs and Tourism portfolio.”

Harris said that a growing interest in the hinterland areas right along the Coast and the Wyong valleys were areas presenting great opportunities for tourism now and into the future.

“There’s so many people who are really trying hard to promote tourism and jobs.

“In Wyong itself, there’s new restaurants and small businesses, there’s places like Long Jetty and Woy Woy and then there’s all the emerging ecotourism opportunities,” he said.

“We’ve already got a market, a very diverse market, it just needs promotion and resources.”

Harris said he would be looking to promote day tours from Sydney and Newcastle, especially while the international market was stalled through the Covid pandemic.

“There’s also some great opportunities for cultural tourism and there are plans with Darkinjung for an Aboriginal cultural centre, which I’ve been working on with them for quite a number of years.

“The Central Coast is home to a growing Aboriginal population and I will continue to be a strong advocate for recognition of the economic and cultural opportunities available and I am committed to working with local Aboriginal organisations to explore these opportunities.

“I’ll be lobbying the Minister for Jobs, Investment and Tourism, Stuart Ayres, to make sure he’s aware of what we have to offer on the Central Coast and how we can tap into those benefits,” he said.

Harris said he would also continue to work with his networks, for example, the Tourism and Transport Forum, which is the peak body for tourism, as well as Central Coast Tourism.

“I have always ensured that I use my role to further the agenda of improving outcomes for the people of the Central Coast whether through improved infrastructure or better services.

“Our Central Coast Labor team works hard to prosecute the case for residents and in my new role of Shadow Minister for Jobs, Investment and Tourism, there are incredible opportunities to put the Coast at the forefront of the State’s economic agenda.

One of the Peninsula’s busiest roads needs an upgrade

Have your say on Central Coast Strategy