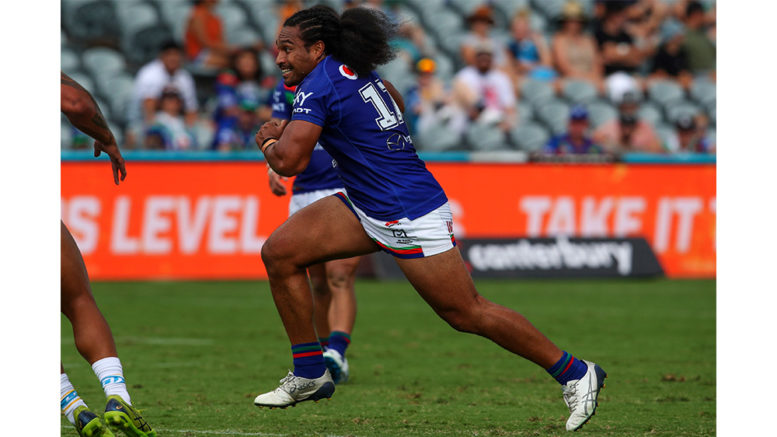 It was another intense affair for the Warriors at Central Coast Stadium against the Wests Tigers, but one that finished in victory, end score 30 – 26.

The lead changed hands multiple times throughout the 80 minutes and both teams had to dig deep to stay in the game.

One notable performance was that of Reece Walsh.

A late decision to start the 18-year-old at Fullback paid off, with the young man making the final pass for three tries and scoring a further one himself.

With dampness lying slick on the green turf, it was the Tigers who were first to post points through a fifth minute try.

It was the second quick attack by the visitors early in the game, but the first to yield results via a cute grubber from Joseph Leilua.

It was a slow start for wrong footed rookie, Walsh, who could not redirect his line before Luke Garner pushed through to place the ball firmly down in the dead ball zone.

The Warriors’ response came right away in the 11th minute with their first attack on the line.

It was Walsh who made up for his earlier mistake by setting up Marcelo Montoya in the corner with a double cut-out pass.

Kodi Nikorima’s conversion attempt out wide was denied by the near side-post, maintaining the game score at 4 – 4.

The pendulum was quick to swing back toward the Tigers through a try coming from a well timed pass.

Moses Mbye received the ball and quickly placed a simple pass to Garner, giving the Second Rower his second meat pie of the night.

For 15 minutes, the play turned to a battle for possession, with the momentum remaining mostly with the Tigers.

A couple of quick passes got the ball to the captain, who put on the after burners to fly through the middle of the Tigers’ defensive line.

His final pass found Jack Murchie with nothing but open field between himself and the white line.

The try ignited a new attacking energy in the Warriors that resulted in a try n their very next movement to the line.

Again, it was Walsh who set up the try with another two-man cut-out pass, this time finding Tuivasa-Sheck out wide as the beneficiary of the overlap.

Before the end of the first half, the points came again for the Warriors, this time for the two time assister so far, Reece Walsh.

The golden pass came from Nikorima to Walsh, in behind Adam Pompey, who drew in the defender to open up the gap.

A fresh boost of pace from the 18-year-old saw him get to the sideline, and a glorious dive for the paint brought the Warriors’ half time score to 18 points.

It was only three minutes into the second half that a return try came for the Tigers due to a sloppy handling error from Montoya.

Luke Brookes’ grubber in behind was read well by the Warriors’ winger, but the ball slipped out of his grasp.

David Nofoaluma for the Tigers was first to it with a fast dive, bringing his team back to within two points of their hosts.

This two point deficit was taken away in the 56th minute due to a successful penalty goal from Adam Doueihi.

It came as a result of a 10-minute sin bin worthy penalty given to Ben Murdoch-Masila for cynical play, slowing down the Tigers’ attack that threatened to go the full length of the pitch after a pass intercept from Nofoaluma.

A further two points came for the Tigers from a penalty goal only five minutes later, given due to Jack Murchie’s high tackle.

Soon thereafter, and once Murdoch-Masila had less than a minute left in the bin, another dangerous tackle was performed by Eliesa Katoa, one that was deemed by referee, Matt Noyen, to be worthy of another sin binning.

The Warriors were behind and suffering for their ill discipline, and yet lucky to still be within a try of the lead after conceding ten unanswered points in the second half.

Yet the tide turned for the hosts in the 69th minute, with a try coming for Wayde Egan.

Stepping back on the inside, Nikorima fed a light grubber in under the posts and the Hooker was first onto it.

Following this by less than two minutes came another try for the Warriors, to push their advantage out beyond one converted try.

The six-pointer was set up yet again by Walsh, who earned his try assist hat-trick with another cut-out pass to find Montoya out wide.

With a man down, the Warriors had scored 12 points to turn a two point deficit into a ten point lead.

With a cushioned lead on the score board, the Warriors managed to see the game off, despite conceding a 78th minute try to bring the Tigers back to within striking distance.

The try came from strong man, James Tamou, who wrestled his way out of the tackle to fall under the posts.

One last chance came for the Tigers through an attack that went to and from both sides of the pitch, and after the final whistle, but ultimately ended in a dropped ball five metres out.

The win has brought the Warriors back into the top eight ahead of their next game against the North Queensland Cowboys, away, on Friday May 28.