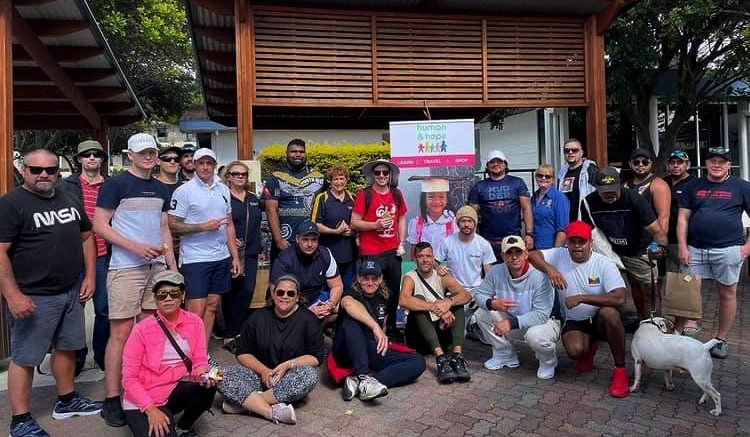 When CCN spoke to Ben Brown in April, he was aiming to raise $20,000 for Human and Hope to support an education program in Cambodia with his community walk called Walk to Cambodia, which was held on April 18.

The good news is that Brown exceeded his own expectations and raised $24,000 for the cause over the month of April, which will fund the education of 202 children in Cambodia for a year.

“It was a beautiful day and it was a great turn out… it was very pleasing and I am very thankful for the community’s support.

“This donation will be a life changer for the 202 kids, as it will open so many doors for them, and it’s truly great to be a part of this,” Brown said.

The community walk kicked off at the Long Jetty Foreshore where Brown, his family and friends, Rotary Club members, Human and Hope members and clients from the Glen, all completed the 45-minute walk to Memorial Park in The Entrance.

“We had the majority of people who came and did the walk stick around for a barbeque afterwards where some Rotarians cooked sausages donated by Sausage Man in Wyong, and Tumbi Wholesale Meats.

“Baker Street in Gosford also helped prepare things like mustard, sauce and onions for the barbeque as well.

“All the participants were touched by the generosity of the day.” Brown said.

Due to the success of this year’s event, Brown plans on hosting it again next April where he hopes to top this year’s success.

“We raised around $12,000 last year, so we pretty much doubled that this year.

“We are always looking to raise more money than the previous year so why not try and top it again?

“We exceeded our expectations this year so hopefully we can do it again next year.” Brown said.

Brown has been involved with Human and Hope since 2014, and he is also a disability support officer, mentoring people with disabilities to advocate and speak for themselves, something he knows personally as he lives with Cerebral Palsy.

During the month of April, Brown walked a total 465,599 steps for the cause.