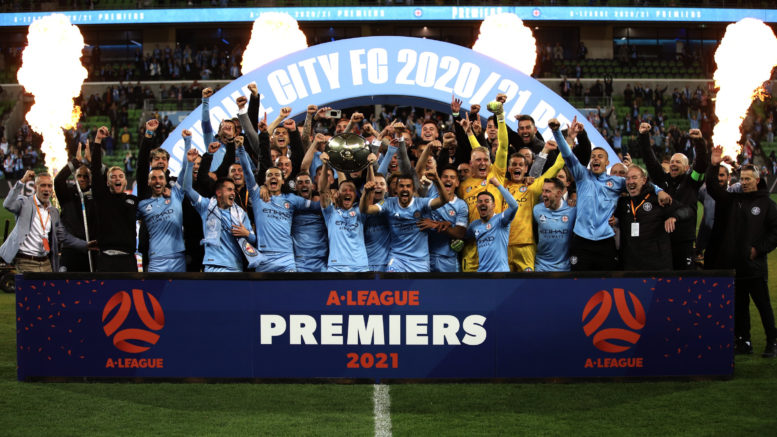 In a season defining match at AAMI Park on Saturday evening, Melbourne City have beaten the Central Coast Mariners 1 – 0, and as a result have been crowned as the 2020/21 A-League Premiers.

This is the first time that the club has achieved this accolade, and they have done so with two match still to be played.

It was another controversial game for the use of VAR, with two lengthy checks being employed to deny goals, one against City and one against the Mariners, prior to a penalty kick.

The early chances came for City, but without results, with two shots missing the mark in the first five minutes.

This pressure was maintained by the hosts throughout the remainder of the first half but without the success of finding the net.

The opportunities on goal were limited for the Mariners, although their sturdy defence kept the scoreboard static.

The breakthrough goal finally came for City in the 59th minute, put away Craig Noone.

The Mariners were unable to clear the ball from their penalty area, with a new attack reaching Adrián Luna in a prime position for a cross.

His lobbed ball loomed across goal toward Lewis Miller, yet Noone capitalised on the defender’s low body height with a leap above to head the ball back across goal and into the net.

With one hand on the premiership, City kept pushing their advantage, meanwhile continuing to keep the Mariners from getting into prime positions on goal.

A second goal appeared to come for the hosts in the 85th minute with a close to the line, and seemingly accidental, touch from top goal scorer, Jamie McLaren.

Only after the home fan celebrations had died down did a VAR check begin to assess a possible handball by McLaren earlier in the play.

As a result, the on-field decision of a goal was overturned and the play was resumed with the score remaining at 1 – 0.

This gave the visitors another chance to snatch a draw and force their hosts to wait at least one more week before being crowned Premiers, and they responded with a new level of pressure in attack.

The tension in the stadium reached a peak when a late corner in injury time was awarded to the Mariners and goalkeeper, Mark Birighitti, was sent up into the penalty box.

The ball was swung in too close to City keeper, Tom Glover, who was able to get his hands on it, although it was immediately followed by the referee’s whistle.

A penalty was awarded for the Mariners against Aiden O’Neill for pulling down Birighitti as he fell.

After going the full game without a shot on target, the Mariners now had a golden opportunity to equalise.

However, the chance never came to fruition.

Again, a lengthy VAR check interrupted Oliver Bozanic’s penalty spot shot on the premise that Birighitti had accidentally stepped on O’Neill’s foot and caused him to fall in the first place.

To the great delight of the home fans, the on-field decision was again overturned and play was resumed with mere minutes left.

In the end, the game time clock reached 15 seconds shy of 100 minutes, determining Melbourne City to be the A League season Premiers of 2021.

Although the finals series is still to be played, Melbourne City have locked in the top spot going in and earned themselves straight passage into the Semi Finals.

The Mariners have dropped down to third place with 36 points, one point above Adelaide United and Macarthur, although the latter of these two still have a game in hand to be played on Sunday evening 8:15pm.

The next game for the Mariners will in fact be Macarthur away and they will have to improve their shot and goal counts if they are to maintain their position in the top four.