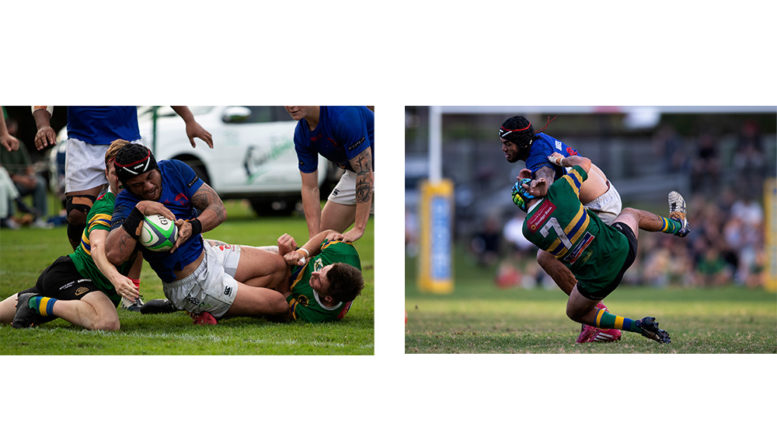 In the local derby match between the Terrigal Trojans and Avoca Beach Sharks, it was the northernmost team who took away the win and secured a one-point lead on the Swietelsky Premier One league table.

Played on Saturday, May 8, at Heazlett Park, the visiting Trojans came away with a 34 – 15 win, although lost in the Premier Two, Presidents Cup and Women Tens.

The Premier One showdown was an intense and physical game that remained in the balance until the Trojans ran away in the final quarter of the match.

After 15 minutes of both teams pushing to get the upper hand through big hits and fast play on the ball, the score was level at 3 – 3.

Terrigal then capitalised on a brilliant run by Adam Danckert, who passed to Frankie Webber to score.

The momentum continued to move for the Trojans with a second try to boost the visitors lead to 17 – 3 lead.

But Avoca were not to be easily undone and responded by posting two of their own tries before the end of the first half to bring the score to 17 – 15.

A try early in the second half pushed the Trojans into a seven point lead, although the visitors could not pull further away until the final 20 minutes of play.

It was during this period that Outside Centre Mitch Hirst was able to cross for a further two tries, on top of one in the first half, to complete his hattrick and a great period of play for his team.

Terrigal’s further 17 points in the second half while holding their hosts scoreless showed they will again be a major force in this year’s competition.

Avoca also showed their quality but will need to look to their fitness to play out the full 80 minutes in futures games.

For Terrigal Head Coach, Michael Farrelly, the intensity of the contest was a sight to behold.

“It was a brutal game, as tough a local derby as I’ve seen in a number of years, both sides got really stuck into each other from the start,” he said.

“I wasn’t happy with our discipline in the first half when we gave away seven penalties.

“Avoca are a good side once they get into the attacking zone and are hard to defend against, so we spoke about our discipline at half time, tightened up in the second half and were then able to get away with the win.

Farrelly also spoke on the great effort of Hirst to come away with a hattrick.

“He really tackled his heart out on the weekend and also played really well with the ball.

“Our Inside Centre, Harry Hughes, was really good defensively for us as well and our forwards were led really well by Salipopo Pamata, who got the team match points.

Elsewhere on Saturday in the Swietelsky Premier One, the inaugural Moroney Acreman Cup was played between northern Central Coast rivals Warnervale and The Lakes, with The Lakes coming away with a 21 – 7 win.

A neck injury for one of The Lakes’ front rowers caused the game to end early, although both teams will look forward to the next opportunity to compete for the silverware later in this season.

In the other game Hornsby defeated the Ourimbah Razorbacks 22 – 13 to secure a spot in the top four and will now face Terrigal in Round Six.

“They’re in good form, Hornsby, their last couple of weeks have been good,” continued Farrelly.

“They beat us at the Haven, our home ground, last year and they’ll be confident to come out and do it again.