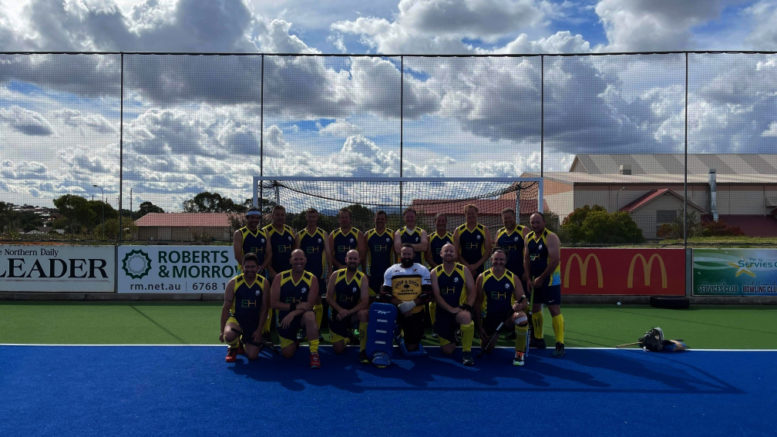 The Men’s Over 40 and Over 45 State Championships went ahead in Tamworth from Friday to Sunday, April 30 – May 2, with a Central Coast representative side competing in both divisions and coming away with one podium placement.

The Over 40’s team had an undefeated run and ended in the final against Sydney, earning them the silver medal, whereas the Over 45’s team finished third in their pool draw after two wins, a loss and a draw.

For the Over 40’s, an exemplary pool stage run saw them post 10 goals for and only concede two, with a 4-1 win over Tamworth in their first game starting this competitive streak.

This gave to the Central Coast side the top spot in their pool stage and saw them face Orange again in the Semi-Final, a game they won 2-0.

The dominant performance came at a cost for the team, who had to cope with a large number of minor injuries over the championships and to call on players in the Over 45’s team in order to make up the numbers.

In the Grand-Final, Central Coast faced Sydney and fell to their opposition 3-0.

Sydney’s three early goals in the opening 15 minutes were all they needed to stabilise in the match and see it out to the end.

In the eyes of the Central Coast Men’s Masters Co-ordinator, Kevin Beaton, who also decided to step up and play over the championships, it was the strength of the team’s defence that was crucial in reaching the final.

“The commitment we brought to our defence and the support we showed each other was fantastic throughout the whole tournament,” he said.

“Quite a few of us hadn’t played together before, but overall, everyone dug deep and played for each other.

“It was a great effort to go away with a group of guys and play the way we did.

“Our goalkeeper, Mick Tweedie, had an absolute blinder in the final and a really good tournament all weekend.

“Having Mick behind us, we certainly knew we were in good stead in our defence line.”

Beaton was not the only one to note the performance of Tweedie, for he has now been selected in the NSW State Over 40’s Division One team, along with his Central Coast fellow, Mark Graham, in Division Two.

Meanwhile, the Over 45’s team were unfortunate to miss out on a finals’ run after remaining undefeated in their first three matches.

However, the team’s 1-0 loss to Northern Inland in their final pool stage game cancelled out their chances of reaching the Semi-Final.

Despite this, Justin Wicks was recognised for his efforts on the field by being selected in the NSW State Over 45’s Division Two team, and Trevor Gardner also performed well to be chosen in the Division Three side.

With a lot to be proud of over the weekend championships, Beaton and Central Coast Masters Hockey can look forward to maintaining the momentum in their upcoming events.

“Going forward, we’re hoping to build on these results with some of the guys in the 45’s team also eligible to play in the 50’s championships in five weeks in Grafton.

“What we have now in the Over 45’s side we can build upon with some of the younger guys coming through to strengthen for next year.

“The ultimate aim is encouraging more of the Masters players that are eligible to come away and enjoy a weekend of friendship, catching up with people from all across NSW and playing competitive hockey at our age.”

With the 2021 season now well underway across NSW and Australia, and Central Coast Hockey still hosting games for all ages at their recently renovated park in Wyong, the region can still look ahead to plenty of Hockey action to occur.

Masters of the State

State Softball Championships to be held in Tuggerah