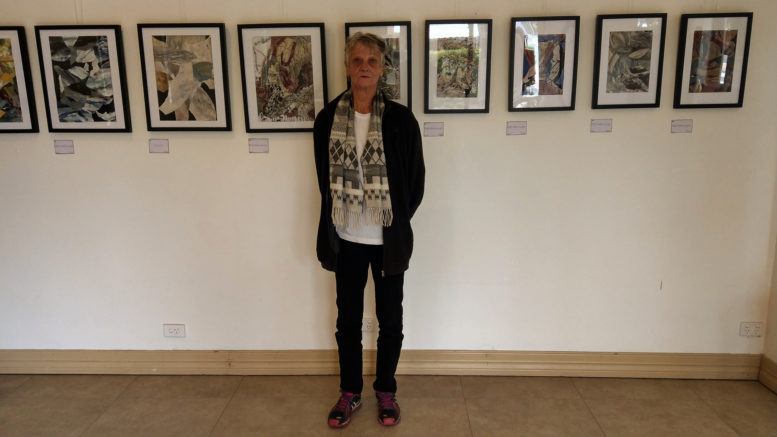 It was a chance conversation with friend and artist Kath Giovanelli which introduced Trish Waddington of Macmasters Beach to the art of collage late last year.

And now the self-styled collage artist is holding her first solo exhibition in a gallery at Avoca Beach.

“I was helping Kath clean out her studio as she prepared for her own solo exhibition at Gosford Regional Gallery,” Waddington said.

“She wanted to throw a lot of paintings out and as an avid recycler I wasn’t happy about that.

“So she suggested I take them home and repurpose them, encouraging me to look into collage.

“I had never done it before, but I took some of her paintings home, cut them up and began to experiment with making collages with the pieces.

“People really seemed to like them and began talking about me having some sort of show,” she said.

Waddington uses old artworks found discarded and has also started to experiment with doing splatter paintings of her own, which she then cuts up and uses as collage pieces.

“I don’t usually have a theme in mind, I just start gluing pieces and I have idea what will come out, but people see all sorts of things in them – animals, people, scenes from nature.”

Waddington’s own love of conservation is evident in the tones she uses, often representative of earth, fire and water.

It began on May 1 and continues until the end of the month.

“People have been lovely and I have already sold several.”

Mixed Media Collage continues until May 30 at 1/177 Avoca Dr and is open from 11am-3pm Thursdays and Fridays and 10am-3pm Saturdays and Sundays.