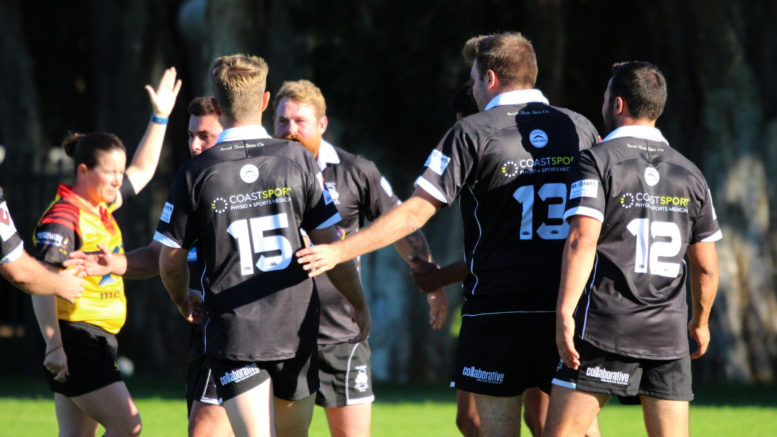 Razorbacks First Grade team (from Round One)

In a pulsating Swietelsky Premier One match that swung to and fro throughout the 80 minutes, the Ourimbah Razorbacks have logged another win over the Kariong Wanderers, 30 – 24, after scoring at the end to take the lead.

Played at Ourimbah Rugby Park, the game had the potential to go either way, with scores remaining close and neither team able to take a winning break on the other for very long.

The Razorbacks started the match well with an unconverted try, but it was not long before Kariong took the lead with a seven-pointer in the 18th minute.

After dominating in territory and possession for most of the first half, the Razorbacks were rewarded with two tries to launch into an 11 point lead, the largest to be had all game.

Before the half time break, Kariong marked the start of their resurgence with another converted try to bring the score to 18 – 14.

Throughout the second half, both teams were able to post 13 points so that the four point difference at half time remained the difference at full time.

Kariong scored first to take the lead, 18 – 21, then the Razorbacks hit back to make it 23 – 21, only for Kariong to post a penalty goal and re-establish their score board dominance by a single point.

The final twist of the game was sprung by the hosts, who scored late in the game to take the lead one last time.

The play was positioned on the Kariong defensive five metre line for a scrum, with the feed for the Razorbacks.

After putting on a good push, Captain and No.8, Matt Martin, picked the ball up from the back to charge over for the try.

Although the Wanderers came back with a barrage of attempts in their attacking half for the final five minutes, the Razorbacks were able to hold them off until the final whistle, end score 30 – 24.

For Razorbacks’ Head Coach, Matt Hopkins, the performance was the best his team has produced all year.

“The scoreboard was closer this week than in our wins in other rounds, but for us, it was our most complete performance,” Hopkins said.

“It comes at a really good time with us playing first place Terrigal this week.

“Going into this game, we needed a big performance to put us in a good position and take our mindset away from our two previous losses.

“There is still plenty of room for improvement for us so we’ll just keep digging away, not expecting to be perfect overnight but to be making improvements.

“Our mantra is ‘do your job’, so if everybody does their job, we’ll be in a great position moving forward.”

This game against Terrigal will also host the Old Boys Day for the Razorbacks, where over 100 former players for the club over their 40 years of rugby, are to return in force to give to their side as much home team advantage as possible.

With only two points between Terrigal and Ourimbah on the table, there will be everything to play for.

“We try and make our home ground a fortress that clubs don’t want to come and play at, but that also extends to the fact that we don’t ever want to lose at home,” continued Hopkins.

“We always try to instil into our culture that if we’re playing at home we go into that extra gear.”

The Wanderers will be disappointed to have finished second best to the Razorbacks, yet their persistence has earned them a bonus point to position them in third place on 15 points.

The third Premier One game on the weekend presented a small upset with the Woy Woy Lions defeating the Avoca Sharks by 31 – 27, to bring both teams into equal fifth on 11 points, behind Hornsby on 12.

The Lakes and Warnervale both had byes this week to lick their wounds, but will need to rebound quickly if they are to remove themselves from the bottom two rungs on the ladder.

In the Women Tens, the end result was reversed, with Kariong coming away with a late try to win 20 – 15.

The women Wanderers were too good for their Razorback hosts, although the game was close and hard fought all the way throughout.

The early lead came for Ourimbah due to an effortless try from Ellie Dark.

Her team’s back line showcased some excellent speed and discipline, resulting in Makayla McCarthy also scoring in the corner.

The real contest in this game was within the forward packs where building pressure led to a number of crucial turnovers.

The final try came from a turnover in the dying moments of the match, only 15 metres out from Ourimbah’s try line, pushing the Wanderers into a five point lead that was rewarded along with the final whistle.