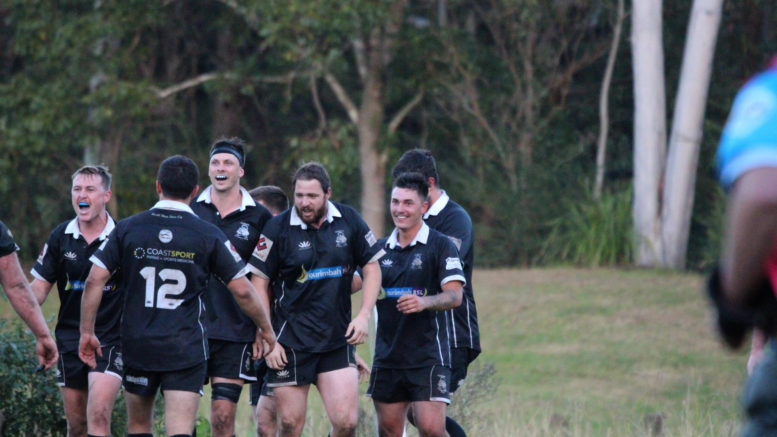 In the Swietelsky Premier One Rugby Union competition, the Ourimbah Razorbacks have overtaken the Terrigal Trojans in first place on the table after defeating them 28 – 13.

Prior to this, the Terrigal women were victors over Ourimbah on the day in a dominant 54 – 0 game that has solidified their for and against score tally well above all competition.

The games were played at Ourimbah Rugby Park on Saturday, May 22, a day that also hosted the annual Back to Ourimbah Day, wherein old club players and members returned in their inaugural year jerseys, from 1981, and barracked for their local club.

Although the extra sideline support was not enough for the women, who came up against a more experienced opposition, it did make a difference for the Premier One Razorbacks, who were able to end the Trojans’ undefeated streak and keep them to their lowest point scoring tally all season.

It was Terrigal who were able to get on the scoreboard first with an early try, although Ourimbah were quick to regroup and rebound with their own early try from the next kick-off.

A second try followed for the hosts, along with a penalty goal for the visitors to make the score 12 – 10.

From here, both teams applied a strong degree of defensive pressure, yet the Razorbacks found two opportunities to kick a penalty goal and push themselves into an eight point half time lead.

The Razorbacks continued to hold the sway in the second half despite the breakaway chances being few and far between.

The only points to come for Terrigal were via a single penalty goal, and meanwhile, Ourimbah went on to post a further ten points through a penalty goal and a converted try.

The best players for the Razorbacks were Flanker, Jarrod Grange, who was also responsible for kicking the vital penalty goals, fellow Flanker, Kaituu Kaufana, and Prop, Brett Cunningham.

For Razorbacks’ Head Coach, Matt Hopkins, there was never any point throughout the game where he thought the win was secured, not until the final whistle.

“When Terrigal scored first, the bubble burst for us and the boys knew they had a game on their hands,” he said.

“We always knew we would have, due to the fierce rivalry between us two over the past decade, having played multiple Grand Finals against each other.

“Our goal was to continually supply scoreboard pressure whenever we could, and we definitely took every opportunity we got to take a penalty, which went a long way towards winning the game.”

The win has sent the Razorbacks to the top of the table, clear by a slender two points.

“I think for us we came in as underdogs against Terrigal and that worked in our favour because we fed off that,” continued Hopkins.

“Now we’re back on the top of the table and that obviously puts a lot of pressure on us, but it’s a challenge we have to embrace instead of shying away from.”

In the prior Women Tens’ match, the efficiency of the Terrigal women was too much for the hosts to bear, despite forcing some early errors out of them due to strong carries from the Ourimbah forwards.

Terrigal bounced back very quickly, regrouping effortlessly after some pivotal plays made by Bella Tisch.

Ourimbah showed their excellent technical skills in their kicking game, yet it was not enough to obstruct the Trojans in scoring eight unanswered tries.

Ultimately, the day of rugby may be considered a draw, with a further win coming for Ourimbah in the President’s Cup, followed by a loss in the Premier Two.

Nonetheless, the day was considered a great continuance of the annual Back to Ourimbah Day event, which celebrates the formation of the Razorback club in 1981.

Formed as a break away from Gosford Club by members who decided to found a rival team, the Back to Ourimbah Day traditionally focuses on the derby between these two.

However, with Gosford not competing in the Premier One this season, the event turned to the club’s rivalry against Terrigal, which has been hard fought over the past decade.

“It was a hostile environment for Terrigal to play in on the weekend and we were fortunate that it was on our side,” concluded Hopkins.

“I’m sure that when we go to The Haven Oval in Terrigal, there will be a similar showing from the Terrigal faithful who will be looking to make things really difficult for us.”

With a bye coming up for the Razorbacks, their next challenge will be against Warnervale in Round 10, on Saturday, June 5.