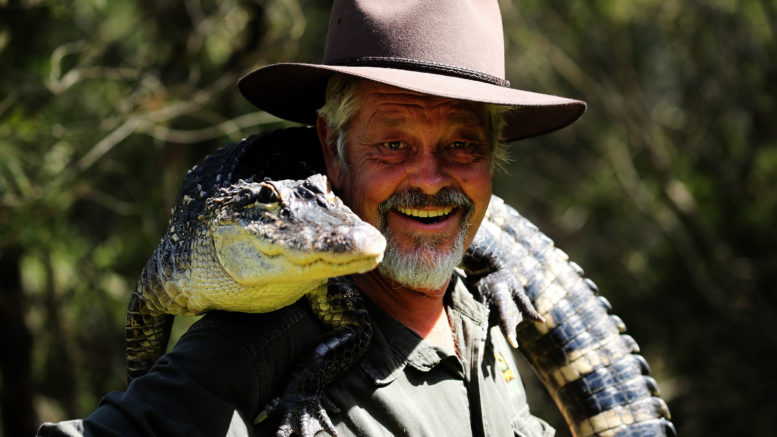 WARNING - DO NOT USE - SPEAK TO NICOLA GIBSON ON PICTURE DESK - Pictured at the Australian Reptile Park today is Ranger Mick (Michael Tate) with Rosie the female American alligator. Mick will do his 45,000th show at the Zoo this holidays. Picture: Tim Hunter.

Ranger Mick started at the Park in 1992 with a noticeable love for animals and a flair for keeping visitors entertained and also educated while he told his stories and cracked his jokes to new audiences each and every day.

It’s estimated that over five million people have witnessed an iconic Ranger Mick talk over the years.

He also heads up the Education section at the Park and visits schools from the Central Coast, Sydney and Newcastle to stand before hundreds of students at a time, often introducing them to their first-ever snake.

“It has been a dream to be able to wake up every morning and talk about animals all day to visitors,” Ranger Mick said.

“I like to make jokes along the way and keep everyone’s attention the best I can, but there’s no better feeling than standing in front of everyone while a Lace Monitor decides to go to the toilet on you, mid-show.

“(I had one person) come up to me after a show and say thanks to my snake bandage tutorial he was able to save his brother’s life and get him to hospital to receive some of our antivenom.”

The Park icon isn’t going anywhere any time soon, and visitors can expect to see Ranger Mick around the Park for a long time yet performing his iconic shows with fun jokes.

“I have seen many different visitors with different stories visiting here at the Australian Reptile Park over the years, and it truly never gets old listening to someone tell me about their impressive reptile collection or their favourite animal … there’s never a dull moment,” he said.