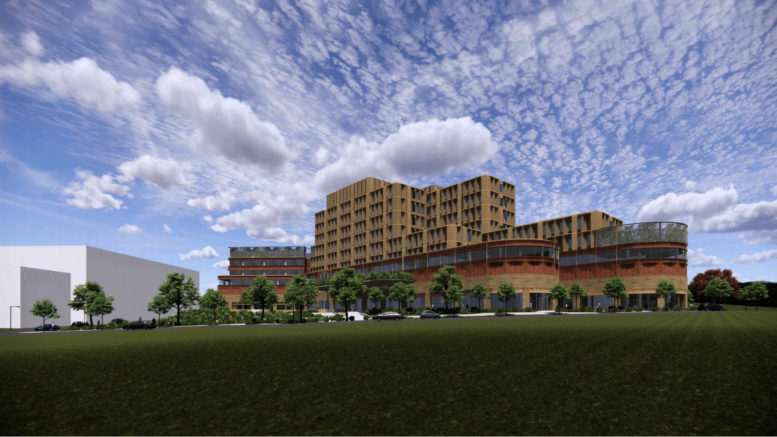 An artist’s impression of the new Northside private hospital

The $172M Northside Private Hospital at West Gosford has been approved by the State Government as a State Significant Development and is expected to open in 2025.

The new 238-bed facility has been given the tick to meet the growing need for better healthcare facilities on the Central Coast.

Minister for Planning and Public Spaces, Rob Stokes, said it would provide new jobs, a multi-million boost for the local economy and improved healthcare access for the fast-growing region.

“Once it’s underway, this project will not only support the existing Gosford Hospital but will also inject $172M into the local economy, provide more than 2,200 construction jobs and create 460 ongoing full-time jobs.”

The hospital will be located on Racecourse Rd in the former disused Ausgrid Depot.

Parliamentary Secretary for the Central Coast, Adam Crouch, said it was a vital facility given the population growth of 95,250 residents expected by 2041.

He said construction was expected to begin by mid-2022.

“The new hospital will be connected to Gosford by a shuttle bus, improvements to a nearby bus stop and more than 300 parking spaces for patients, visitors and front-line workers,” he said.

A second development application is expected to be lodged for the construction of a five-story building for retail and medical support services, located adjacent to the hospital.

In approving the application, the Department of Planning said the project would provide a range of benefits for the region and the State as a whole.

The department said issues raised by the community during consultation and in submissions have been considered and adequately addressed through changes to the project and the recommended conditions of consent.

It said although the proposed development would exceed the height and floor space ratio (FSR) controls that would ordinarily apply to the land, the Gosford State Environment Planning Policy (SEPP)  provides exceptions which allows consent to be granted despite the variation from the controls.

The Department said it had assessed the height and scale of the proposal on merit and supported the scale of the development, as it has strategic merit, would sit comfortably within the emerging future character of the area, would not result in any unacceptable amenity outcomes, is consistent with the objectives of the planning controls applicable to the site, and would not result in unacceptable traffic impacts.

Call for inquiry to assess coal mine approvals