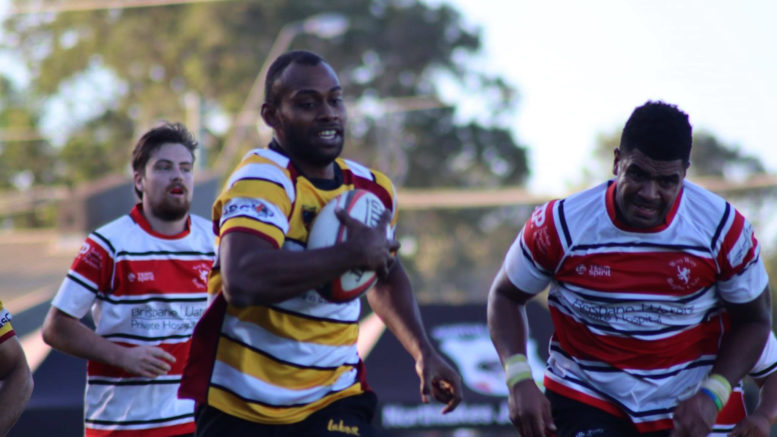 Round Four of the Central Coast Rugby Union season brought two big results in the Swietelsky Premier One conference to rebalance the league ladder.

Played over Saturday, May 1, a crucial win came for The Lakes, their first of this year’s campaign, whilst a defeat for the Ourimbah Razorbacks has brought their 2021 undefeated streak to an end.

Matching up against the Woy Woy Lions at Slade Park, The Lakes came from behind to prevail with a momentous 57 – 28 point win, posting nine tries to Woy Woy’s four.

It was Woy Woy who opened the scoring in this match and soon found themselves ahead by 14 – 7, a strong sign of their ability to continue their quality form onwards from their opening season win last round against Warnervale.

However, The Lakes stuck to their strong set piece and gained pressure through the middle of the pitch with classy efforts from their backs, Macui Rauluni, Fillimoni Seru and Hardy Pirini.

Over the course of the first half, they gradually took back control of the match and cemented a half time lead of 26 – 14.

Continuing to show a dominance in their back line, The Lakes continued to push their advantage in the second half with a further 31 points.

For The Lakes’ first grade coach, Marhall Hemopo, the turning point in the game was when the team started maintaining possession and building their phase play.

“The Lions had a lot of the ball at the start of the game and when we had the ball we were trying to score off every phase.

“Once we started building from a few phases, we scored our first and second try to level the game, and from there our Fullback, Macui Rauluni, pulled out a couple of pieces of individual brilliance to put us ahead at half time.”

The Lions did not give up on the chase and scored two more tries in the final five minutes to secure themselves another bonus point.

Hemopo also scored twice and Jason Kakato crossed over for one.

The tries for the Lions were shared one apiece between Jim Meya, Kabati Matanakilagi, Zac Doak-Stride and Vetaia Sinalevu, with No.8 Philip Shaw, Lock Pita Pio and Hooker Unaloto Tupou also playing well.

For The Lakes, the win has prepared them for their next week derby match against Warnervale where they will also be competing in the inaugural Moroney Acreman Cup.

This new contest focuses on the strong and good spirited rivalry between the Northern Region teams, which Hemopo expects to be on display this Saturday.

“Although Warnervale haven’t won yet this year, they haven’t lossed by much either and have come away with three bonus points.

“They’ve been playing good rugby and in these local derby games, you just never know what the players are going to dish up.

“We’ve been fortunate against them over the past couple years to come away with the win but anyone at the club will tell you this is a calendar game for us ticked off at the start of the season.

“So we’ll be up for it, though we’re pretty sure Warnervale will be too.”

In the Premier Two match, The Lakes posted an even greater win with an end score of 68 – 12, but faltered in the Women Ten’s match with a score reversal of 39 – 5, going the way of Gosford/Woy Woy.

Meanwhile at Heazlett Park, the Razorbacks fell the first time this season in a 31 – 24 point match against the Avoca Beach Sharks.

Avoca showed from the very first they were to be a strong force on this day, opening the scoring with two penalty goals to Sam Evans.

The Razorbacks were quick to respond and scored the first try in the match to reduce the lead to 6-5.

However, it remained Avoca Beach in the ascendancy for the rest of the first half and they were able to post a further 15 points in the half to go to the sheds with a 21 – 12 point lead.

The Razorbacks came back strong in the second half, unwilling to give up their undefeated run without a fight, and even outscored their hosts by 12 – 10.

Yet it was not enough to overcome the Sharks’ first half lead which kept their noses in front and has now seen them enter the top four on the table with nine points.

Ourimbah still sit well with 12 points on the table, just two behind Kariong in the top spot.

The Razorbacks were best served by Locks James Mann and Josefa Biu, Hooker Sam Kearney and Fly Half Pat Martin.

The dominance of Avoca on this day was repeated across all conferences, with the club also picking up wins in the Premier 2, Women Ten’s and President’s Cup leagues.

The third match of the Swietelsky Premier One saw an even contest between Kariong and Hornsby end 26 all.

The effects of Round Four can be clearly seen on the developing league table, with every team from second to eighth poised within one win of overtaking the team ahead of them.