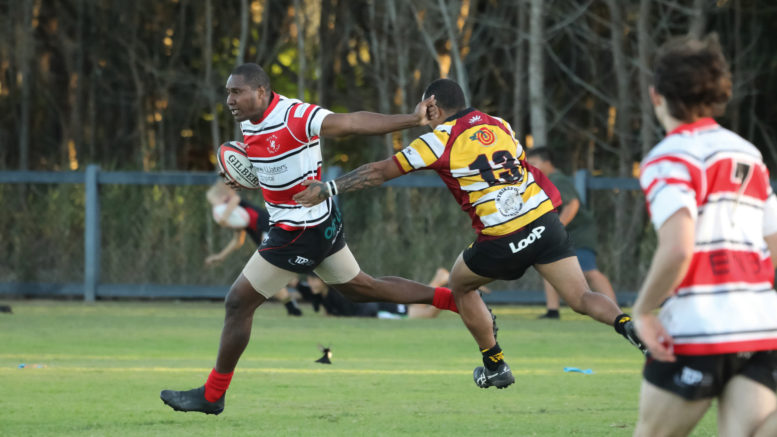 There are encouraging early signs emerging from the Woy Woy Lions in their Premier 1 men’s and women’s teams following big changes to their coaching and playing squad this season.

In the top Men’s team, a season opening win in Round Three against Warnervale preceded a sobering loss in Round Four to The Lakes, but a couple of bonus points have positioned the team in sixth place.

Meanwhile, the combined Gosford and Woy Woy Women Ten’s team have posted two dominant wins in a row, making the most of the marriage between the two neighbouring Central Coast regions.

The Round Three matches against Warnervale were played at Woongarrah Oval and the opening win for the Premier One team involved some great attack and very solid defence.

Woy Woy got away to a pleasing start in the match, leading early with two unanswered tries and then heading into half time 21 – 5.

In the second half, Warnervale showed their unwillingness to be undone at home, fighting back to lock up the score at 31 – 31 in the dying stages of the match.

However, it was Woy Woy who scored a try right at the end of the match to snatch the victory, end score 36 – 31.

For Woy Woy club president, Stu McGoldrick, the win was the first sure sign of the squad’s development after dealing with changing players and coaches.

“It was a very good and open game, very fast moving with most of the field being covered,” McGoldrick said.

“We were lucky to get away in the end with the final try.

“We’ve got a whole new structure with a lot of our older members moving on this year and making room for new players and new coaching too.

“We will steadily improve with more training and as we get to know everyone better.

“The structure is getting there now with a few games under our belt, so I think we’ll start to see some vast improvement on the field.

“Training numbers are good at the moment with two full teams.

“Moving forward we should have a really good structure heading towards the second half of the season.”

For the Women’s team, a 41 – 5 point win marked the first game of the combined Woy Woy/Gosford side, which McGoldrick sees as the result of more depth in the squad.

“Where you’ve got two combined teams you sort of got two lots of standout players, skill sets and also coaching.

“So far there has been good depth on the bench at the moment and the coaching staff are using them well.

“Last year, we were definitely in a development stage of the Women’s rugby, this year I think everyone understands their roles in the team more and they’re playing really well.”

Despite a positive Round Three, Round Four brought another defeat for the Premier One team, losing 57 – 28 against The Lakes.

Played at Slade Park, it was a crucial win for the northernmost rugby club – their first of the season – wherein their nine tries topped Woy Woy’s four.

It was Woy Woy who opened the scoring in this match and soon found themselves ahead by 14 – 7.

However, The Lakes stuck to their strong set piece and gained pressure through the middle of the pitch with classy efforts from their backs.

Over the course of the first half, they gradually took back control of the match and cemented a half time lead of 26 – 14.

Continuing to show a dominance in their back line, The Lakes continued to push their advantage in the second half with a further 31 points.

Nonetheless, the Lions did not give up on the chase and scored two more tries in the final five minutes to secure themselves another bonus point.

For McGoldrick, the game proved too great a test for the new structure.

“Since it’s new coaching and everything else, playing together for a long period of time brought on fatigue and with this the structure broke down.

“It was also a matter of The Lakes being very patient with the ball on the day, a deserved win for them.”

For the Women’s team, it was another great win that finished 39 – 5.

With the team still facing up to the changes in the squad and against opposition they have struggled to beat in recent years, there are sure signs of a resurgence in the Lions.

Now with a bye week to enjoy, the Lions will need to be ready for their next test in Round Six.