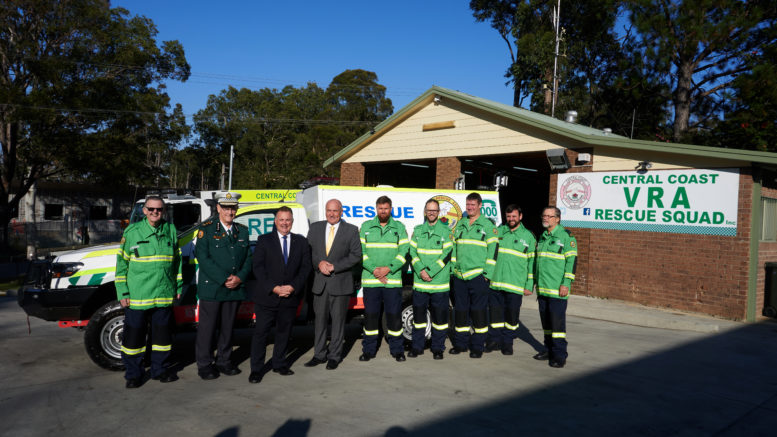 The Volunteer Recue Association (VRA) is celebrating the launch of their first official uniform for members of the organisation, thanks in part to an investment of $1.2M from the government.

Minister for Police and Emergency Services, David Elliot, was joined at the Central Coast VRA in Warnervale on April 29.

Joining Elliot to launch the new uniforms was Parliamentary Secretary for the Central Coast, Adam Crouch, and the VRA Commissioner Mark Gibson.

At the launch, Elliot, Crouch and Gibson officially handed over a $230,000 Light Rigid Rescue Vehicle that will assist the squad in responding to emergencies.

This new vehicle and the uniforms are part of an $18.8M government investment in the VRA over the next 4 years.

“These new uniforms will be supplied for the first time to both operational and non-operational members and will be a significant boost for volunteers,” said Elliot.

“This investment will mean that volunteers who put their time and effort in to protecting the safety of their community will no longer have to rely on donations or have out of pocket costs to be able to proudly wear their uniform,” said Elliot.

“The new vehicle will be a significant asset for the local team of volunteers.

“The Light Rigid Rescue vehicle boasts cutting edge technology and has been purpose built with safety as the number one priority,” said Crouch.

“The Central Coast Rescue Squad has responded to over 300 emergencies and volunteers are well equipped to deal with a range of events,” said Crouch.

Welcoming the NSW Government’s investment was VRA Commissioner Mark Gibson who said: “These new uniforms and investment in the Volunteer Rescue Association represents a new chapter in the organisation’s history, and it shows the Government’s continued support of our volunteers and their commitment to community safety,” said Gibson.

“Our members are ecstatic at the purchase of these new fire-retardent uniforms, that will both unite the organisation and help to keep every member protected when attending an emergency,” said Gibson.

The Volunteer Rescue Association has more than 1,600 members across 50 squads located all over NSW.

The VRA started in 1950 to assist police with recovering people from the Murrumbidgee river as well as providing flood assistance and evacuations around the Wagga Wagga region.

Today, the squads provide primary and support services to the community in events such as car accidents, performing tasks like freeing trapped motorists from their cars.

They can even perform complex operations such as cave and vertical rescues.