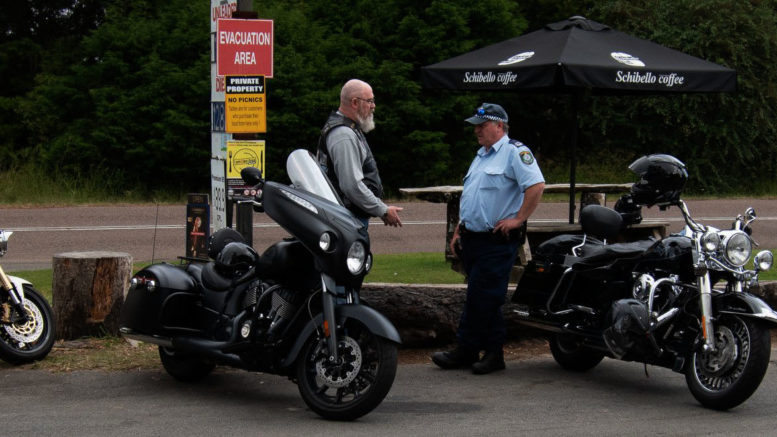 A Safe Riders community engagement day was held at Kulnura on May 1.

Highway Patrol officers from the Central Coast sector and the Traffic Response Group joined Transport for NSW, the Motorcycle Accident Rehabilitation Initiative and the Tuggerah Lakes Police District to conduct the day at Jerry’s Café in George Downes Dr.

They engaged with motorcycle enthusiasts to discuss key road safety objectives whilst enjoying great coffee and sharing each other’s passion for motorcycling.

The Central Coast Sector is the gateway between the Sydney Metropolitan and Northern Region Areas.

It has numerous roads known to be popular motorcycle riding routes.

To date there have been 22 fatal collisions involving motorcyclists across the state.

The Central Coast Sector has had one fatal collision involving a motorcycle rider but also several serious injury collisions involving riders and drivers.

The Safe Riders program was devised to engage with the Central Coast Community and riders.

It includes education and open dialogue with the community on road safety initiatives to reduce serious injury and fatal collisions.

The day saw key stakeholders engage with more than 500 motorcyclists and other road users who were provided with educational material as well as complimentary road safety merchandise for the winter riding season.

Police were joined by a number of motorcycle enthusiast clubs including a large contingent of ladies on two wheels representing International Female Rider’s Day.