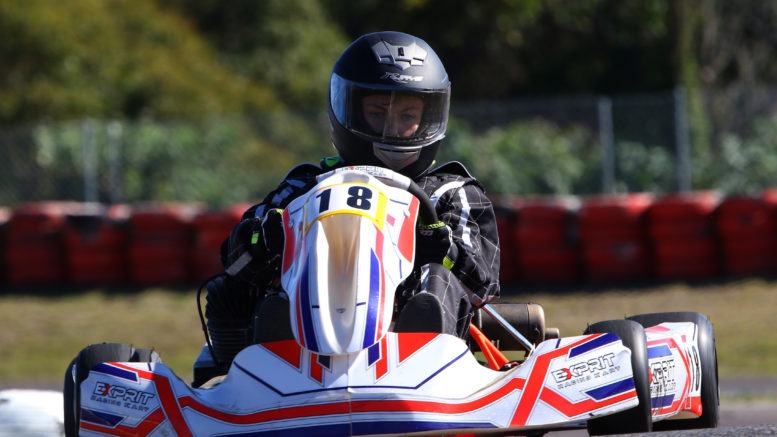 A Killcare teen has put the pedal to the metal and clinched silver at Round Two of the Newcastle Club Championships last weekend.

With only two months experience in karting, Max Mason took out second place at the event which was held at Newcastle Kart Racing Club on May 16.

The 14-year-old completed the 10 laps in nine minutes and 14 seconds, and was closely followed by Lachlan Taylor, who raced across the line just a second later.

Max described the final as a ‘ruthless battle’ as he and Lachlan sought to take the lead.

“My first five laps were really just trying to catch up as I had a dodgy start with someone in front of me [spinning] so he already had a three-car advantage,” Max said.

“Then, as soon as I reached him, the battle begun.

“The final five laps were just constant battling to the point we would be hitting each other, we would be going round corners basically in arms reach of each other, in corners where it wasn’t wide enough for two cars to fit through.

“I got away on the last lap and pulled away at a small distance of around three seconds on him.

“You get a good run off the final corner and steam past them on the final straight and you just have this moment of ‘Jeez, I finally get a breather’.

“When you’re battling with someone, you’re constantly paying attention to where they are, where you are – you have to give 110% every second of the lap.

“One mistake means they get ahead three seconds.”

Reaching a top speed of 69.587 km/h at last weekend’s race, Max spoke about the importance of remaining focused and in control of the kart.

“When you have got people around you, you become more concentrated,” Max said.

“When you’re driving behind someone, you always want to watch how fast they’re going around corners and it builds up your focus.

“Since you’re only two centimetres off the ground, you feel every bump or crack in the road … and everything is very, very fast!

Max’s interest in karting sparked at an early age with his love for Ferrari and famous Formula 1 driver, Michael Schumacher.

Max said he experienced a collision last month during a previous race and had broken a number of ribs.

But that didn’t stop the youngster from returning to karting in an impressive fashion, going from pain to podium in a matter of weeks.

Max said the preparation for his first race back had not changed despite the crash.

“My first time back in the kart felt normal – I didn’t let the crash affect me I just kept going,” Max said.

“I jumped straight back in and started setting faster and faster lap times.

“You can’t let these things slow you down.”

He said he is now looking towards entering the NSW Karting Championships, before taking on a nation-wide competition, and eventually the Formula 1.

Max will head back to the Newcastle club next month to take on Round 3 of the Championships on June 13.