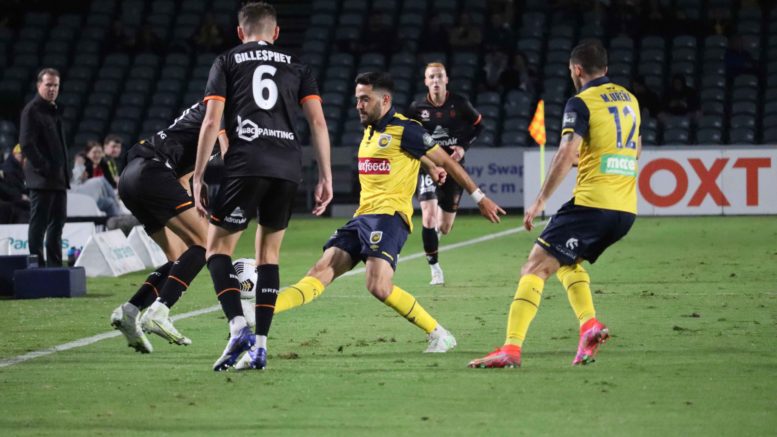 A 1-1 draw between the Mariners and Melbourne Victory on Sunday evening, May 2, has followed the Central Coast side’s crushing 4-0 defeat at home, maintaining their fragile positioning at 2nd on the league table.

The defeat at Central Coast on Wednesday, April 28, was a shock to the system for Mariners fans who have enjoyed their team’s recent positive shift in A-League form.

Along with this terrible precursor, the Mariners travelled to Melbourne in search of their first win after 16 consecutive losses at AAMI Park. Despite all this, the boys in yellow positively lifted their heads in search of another fast gameday start that they have found regularly throughout this season.

The fastest and highest head to lift his head was yet again, front man Matt Simon, who launched the team into the lead in the fourth minute with the game’s first effort on goal. Finding space in front of goal between the Victory defence, Simon benefitted from a pinpoint cross swinging in from Stefan Nigro. Victory keeper, Matthew Acton, was able to get a hand on the ball, but it was struck but Simon’s head with too much power to be kept from trickling into the net behind him.

The Mariners maintained this lead throughout the remainder of the first half, defending well but unable to pull further ahead. An opportunity fell for Alou Kuol in the 30th minute with a hard hit strike from outside the box, but it was aimed too far in from the side post to threaten Acton.

At the start of the second half, there was a disallowed goal against Rudy Gestede for Victory to prevent the home side from bringing the scores back to level. Robbie Kruse’s lobbed pass from the corner of the side post flew high above the Victory Number 9, who was deemed to have pushed Kye Rowles in the back in order to get up to the ball and header it into the goal.

With the scores remaining as they were, it took another ten minutes for the equaliser to be found Callum McManaman with a neatly put away side footed curler that spun around the defending Kuol as if rotating on an invisible axis. The ball fell to McManaman from the free kick out wide after Simon’s attempted clearance. With a quick touch, he shifted the ball to his side and swept his boot around it, orchestrating its end arrival beyond the reach of Mariners keeper, Mark Birighitti.

The scores were locked at one goal apiece throughout the remainder of the 90 minutes, and an opportunity came to Daniel Bouman to retake the lead in injury time. Lewis Miller’s cross was well picked out by Bouman on the penalty spot, who met it with a header that lobbed the ball in the direction of the far top corner, although it had too much weight to fall in time and instead flew put past Acton and the post.

A following corner for Victory brought another golden opportunity for the hosts to steal away the win, ending in a diving save from Birighitti preventing Jacob Butterfield from ensuring this outcome for his team. The clearing header fell to Butterfield’s feet and he struck the ball with venom to the high side of Birgihitti. Although appearing to only see the ball late, the Mariners keeper was equal to it via a double-fisted punch away.

The final whistle followed soon after, giving to both teams a single point to add to their league campaign. For the Mariners, the point has pushed them ahead of Sydney FC after they suffered a loss to Western Sydney Wanderers the day before.

Nonetheless, their position is not stable, with Adelaide and Western United and Brisbane Roar all within reach of overtaking them if they were to win the games they have in hand. The Mariners will have a chance to prepare for their next outing in the A-League which will come on Wednesday May 12, when they travel up to Brisbane to once more face the Roar side who are still hot from their smashing win at Central Coast Stadium.