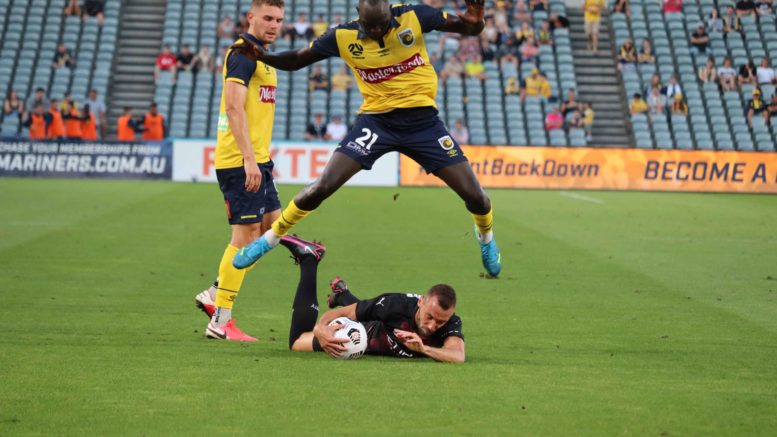 The Central Coast Mariners maintain their fragile position in second place on the A League table after drawing 0 – 0 with Brisbane Roar at Moreton Daily Stadium in Queensland on Wednesday, May 13.

The travelling Mariners were faced with a serious psychological challenge in overcoming the team that convincingly beat them 0 – 4 only a fortnight earlier and were now looking to make it 20 games undefeated against the Central Coast side. They came out of the blocks onto the slippery turf with a lot of energy, making nine runs on goal within the opening ten minutes of play, against Brisbane’s one.

Many of these came from Alou Kuol who found pockets of space in front of goal, outside the box, although not enough to capitalise with a goal. His closest chance early on came in the ninth minute through a shot on target across goal that forced the save from Brisbane goalkeeper, Jamie Young.

From here, the momentum of the game remained in the balance with neither team being dismantled at the back, nor constructing the final clinical touch to take the lead. Daniel Bouman’s 27th minute shot threatened Young for a second time after the Brisbane defensive line was undone due to the effective pass and run play between him, Gianni Stensness and Stefan Nigro.

Despite working hard to create many chances in the attacking third, the Mariners were unable to threaten Young again in the first half. The second half brought the same stalemate in the midfield, with both teams seeming to be more focussed on preventing a conceded goal.

The opportunities that did arise came from mishaps at the back, with both Jack Clisby and Oliver Bozanic forcing openings form the loose ball, forming close attempts skewed away at the last by a deflection. Jordan Smylie had a similar encounter in front of goal in the first minute of being substituted on for Alou Kuol in the 65th minute. A small chip from Matt Simon with his back to goal fed Smylie in the box with an advantageous angle on goal, but again the deflection prevented the ball reaching Young.

Meanwhile, the corner count for both teams continued to rise, and although Roar were more adept at clearing the ball away, both teams suffered from their unchallenging set piece play. When Young was threatened by the header, he proved himself to be equal to it, with his biggest challenge coming from Stensness from Bozanic’s inside boot cross.

The closest chance of the night fell to Joe Champness for Roar in the 75th minute, profiting from a well worked cross-field lob given by Alex Parsons. Champness worked the ball into the box, where he faced Lewis Miller and Bouman shutting down his space. By working the ball onto his inside foot, Champness was able to curl a shot in between the two Mariners and have it drop down on goal, only to have it bounce off the top crossbar back into play.

With the game reaching its final five minutes and a single goal promising to be an ensured win, the intensity of the midfield clashes increased. A number of yellow cards were handed out late, including one for Matt Simon and for Brisbane’s Jay O’Shea.

However, neither team dug deep enough for the winning goal, and the game fizzled out in a goalless draw. The mid-week result gave to the Mariners the single point they needed to jump back up into second place, yet Brisbane, as well as Adelaide United, will have the chance to overtake them if they win their game in hand.

With Melbourne City pulled away in first place with eight points and a game in hand, the following six teams all sit within two points of each other. Wins are the only way the Mariners can ensure their passage into the finals series, although single point draws may be enough to trickle them through the remaining games.

The next chance the Mariners will have to edge forward will be this Saturday, May 15, when they face the Newcastle Jets away.