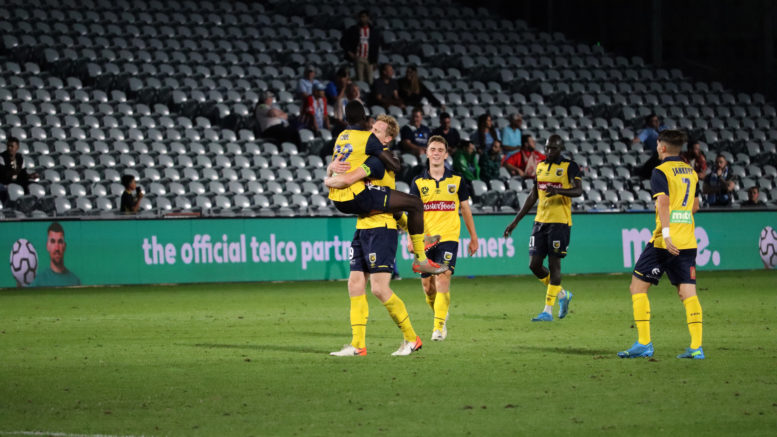 Mariners from an earlier game this season.

The Central Coast Mariners have found their first win in seven games, this time against their F3 derby competitor, the Newcastle Jets, at McDonald Stadium on Saturday evening, May 15.

After a mid-week match against Brisbane Roar where they earned their first clean sheet in ten matches, the form continued into another clean sheet and a single goal to Matt Simon to see the boys in yellow defeat the hapless Jets.

The early chance at the lead came for the home team from a mistimed attempt at a header by Kye Rowles.

The ball bounced ahead for Jason Hoffman, who skipped the ball forward with a touch that had too much weight and allowed Mariners’ keeper, Mark Birighitti, to rush in and deflect the second touch shot.

A follow up shot came from Angus Thurgate, but Ruon Tongyik was alert and able to provide his downed keeper support through a deflection.

From this, a corner ensued and again rustled the feathers of the Mariners’ defence.

Nigel Boogaard was the one who rose highest to reach the in-swinging ball, but his header skimmed the ball too wide past the far post.

The momentum stayed with the Jets for most of the opening 20 minutes, despite an early chance coming for the returning Marcos Ureña and then Simon, both without seriously threatening Jets’ keeper, Lewis Italiano.

Under early pressure, the Mariners conceded a high amount of fouls, giving the Jets multiple chances to swing the ball into the box from set piece plays.

The home side were unable to make the most of them, and throughout the second quarter, the Mariners were able to find more possession and control in the midfield space.

Despite this, the game was very much up for the grabs at half time.

From the get go, the Mariners came out in the second half with a new spark of energy in their play, with Joshua Nisbet posting a shot on target within the first 60 seconds.

The pressure was pushed back onto them and the free kick count for the Jets continued to rise.

However, it was Thurgate’s foul on Daniel Bouman in the box that gave away the most crucial set piece of the game: a penalty for the Mariners.

Running onto the ball from a throw-in, Bouman got a slight touch on the ball in the top corner of the penalty area before Thurgate rushed in on his side and connected with his shoulder.

After another lengthy VAR check, the penalty decision was upheld and Simon, the leading goal scorer in F3 derbys, stepped up to take the chance.

A hard driven low shot into the corner moved the ball too fast for Italiano to reach it in time, despite diving the right way.

The high held shakas from the Mariners’ top goal scorer greeted the away fans tucked away in the corner of the grandstand to mark the veteran’s tenth goal this season.

The Jets responded with a strong intent to reach the goal, but not the clinical finish to dig out a goal.

Roy O’Donovan got close in the 59th minute with a shot curling under the top crossbar forcing a dive save from Birighitti.

Another corner for the Jets followed, but the home side were again unable to make the connection between crossed ball and head.

Heading into the final third, the play moved quickly from end to end, with both defences just about managing to prevent the shot at goal from their opposite’s attack.

The greatest chance the Jets got at an equaliser came in the 87th minute via a lobbed through ball by Ramy Najjarine for Valentino Yuel to chase.

The ball trickled forward dangerously poised at the inside edge of the penalty area, forcing Birighitti out of the box to cut down Yuel’s space.

Yet the substitute forward lacked the composure to feint the ball around the Mariners’ keeper and pass the ball into the goal behind him, instead putting too much weight on his touch to see the ball roll out for a goal kick.

For the Mariners, the penalty goal was enough to see out the win, although the recent concern over the potency of their goal scoring continues.

If the boys in yellow are to make the Grand Final, they must once again find their goal scoring form without relying on penalty spot success.

Currently, their second place position has been maintained, although the following five teams all have the chance to take this from them before the end of the next round.

Next up for the Mariners will be a tremendous first verses second challenge when they face Melbourne City away on Saturday, May 22.