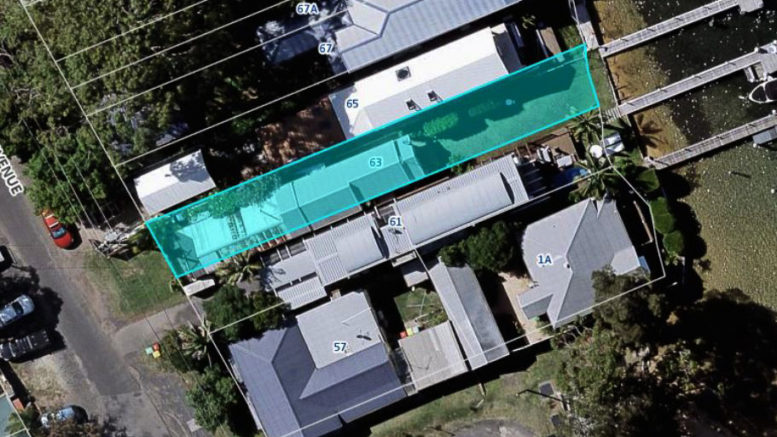 An aerial photograph of the subject site (in blue)

A development application for a new dwelling house and garage in Wagstaffe has been met with concern from the Local Planning Panel after issues were raised about overlooking neighbours.

The Panel approved the application at their meeting on May 13 but said they were concerned regarding ‘the likelihood of overlooking between neighbours on what are very narrow blocks’.

An application for the 63 Wagstaffe Ave site was lodged in January this year to build a new two-storey, three-bedroom house and a detached single-car garage to replace the existing dwelling.

The proposed dwelling is set to be broken into two separate pavilion elements, separated by a walkway on each level, and which provides a ground level courtyard on the northern side.

The proposed garage is a detached structure, located close to the Wagstaffe Ave frontage, which is similar to other garages on properties to the north.

The Panel also said legitimate concerns were raised by the public regarding the ‘sharing of views across boundaries at the waterfront and to the accessibility around the site’.

Fifteen public submissions were received during the notification period of January 28 to February 18, 2021.

To ensure no unreasonable impacts are made on neighbouring properties, the Panel made a series of key conditions: to ensure privacy across common boundaries, the glass to the walkway between the western and eastern pavilions is to be obscure on both the northern and southern sides of the walkway or, in the alternative, both sides of the walkway are to have fixed external privacy screens permanently angled at 45 degrees.

The Panel also said the ground floor and first floor of the eastern pavilion is to be set back 630mm from the northern boundary for the whole of their length (the same as that proposed for the western pavilion); and to allow for view sharing across sites at the water’s edge, the ground and first floor deck of the eastern pavilion is to have openings/apertures in both the northern and southern walls of 1.5 metres in width, commencing at 1 metres above floor level and continuing to the ceiling height of the deck.

The existing dwelling will be demolished in its entirety to allow for the proposed development to be built at an estimated value of $422,918.

The Panel granted their approval of the application, subject to the conditions being met.