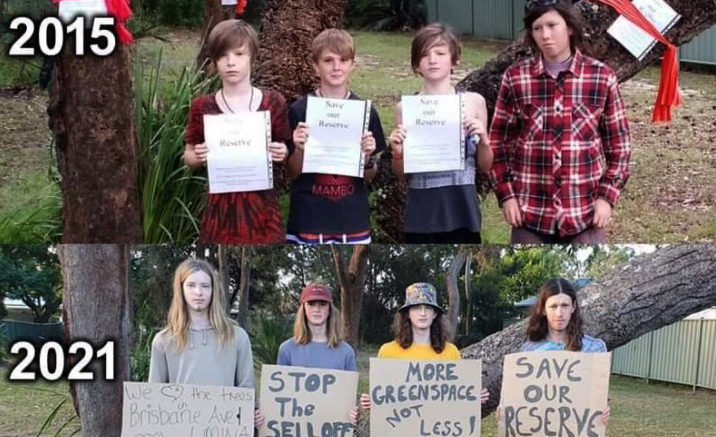 Six years ago, as young boys, they banded together to fight to save the reserve at 83-85 Brisbane Ave, Umina, where they had been playing since they were babies.

The former Gosford Council was trying to sell the reserve back in 2015.

The boys won that time.

Now, the same boys are fighting yet again to save their playground, which is one of the parcels of land Central Coast Council is planning to sell to help pay off its debts.

And this time they really have banded together – with their own music.

They formed bands with school friends who have all spent time playing in the reserve together, and those two bands will be playing at a rally to save the area this Saturday, May 8, from 3pm.

The boys will be joined by Jake Cassar of Coast Environmental Alliance and representatives from GUST (Grow Urban Shade Trees), Save Central Coast Reserves, Community Environment Network and the Australian Conservation Foundation.

Organisers are hoping for a massive turnout to show the council the community means business.

The land is one parcel out of dozens that council is proposing to sell as part of its push to address its debts.

Another two blocks up for possible sale are 23 and 23A Memorial Ave, Blackwall.

Nearby resident Jane Hendy said one of the reasons for buying in Blackwall was the beautiful trees – paperbarks, swamp mahogany and blackbutts – growing on these two endangered lots and some nearby which have now been cleared.

“The trees that remain are doubly precious now, providing shelter to those birds, microbats, and other animals displaced by chainsaws as well as the original inhabitants,” Hendy said.

“As a volunteer for Wildlife Arc, I usually release birds found injured locally into this forest (when they are well enough), which is where many species live and breed.”

In a letter to council Hendy said if council decides to sell the lots it would make a relatively small amount of money compared to it’s debts.

“At the same time the people of the Central Coast will have lost an irreplaceable green space, mature native trees, and the wildlife that live there,” she said.

“The two lots in question are very low lying; I have been told it is the lowest point on the Woy Woy peninsula.

“Residents who park their cars at the edge of the forest find they are bogged down when it rains.

“It would not be a propitious place to put high density dwellings.

“Besides, the only access to this land is from a narrow, unnamed laneway.”

The public has until May 21 to make submissions on the proposed sales.

See the details on Your Voice Our Coast website.