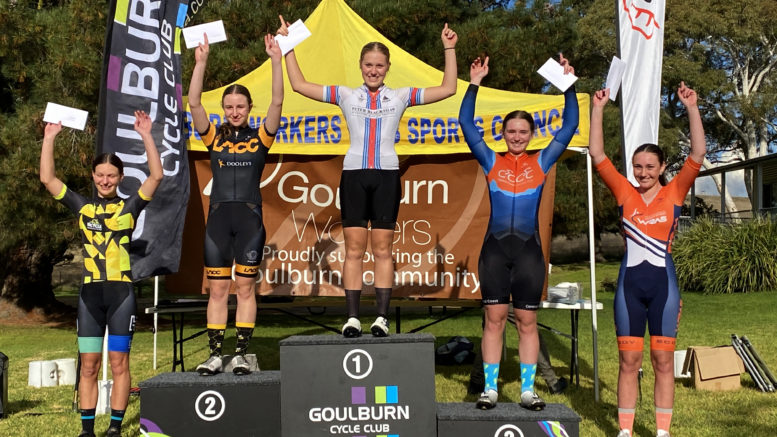 Over the weekend of May 1-2, four members of the Central Coast Cycling Club raced in the  Goulburn Workers Junior 2 Day Tour, coming away with quality results against competitors from across the Eastern Australian States and South Australia.

In the Under 17’s, Nicole Duncan, Maya Dillon and Liliya Tatarinoff, as well as Sonia Vetisch in the Under 15’s, all cyclist who recently made the NSW Track team, flew the flag for the Central Coast.

Over the two days, there were four races: a Prologue, two Road Races and a Time Trial, all accumulating into an overall General Classification score.

In the Prologue, Nicole came second with a total time of 8:17.91, seven minutes behind first place Lauren Bates from Canberra Cycling Club.

Despite winning Sector One of the Prologue, Liliya came sixth overall with a total time of 9:02.01.

Maya was not far behind in eighth place, and Sonia also came eighth in the 15’s.

The first road race is where Nicole shined, coming away with the win in 2:03:52 hours, with Liliya just behind her by less than two seconds.

Maya finished five minutes later with a time of 2:08:57 and Sonia finished fifth with 56:42 in her race.

Nicole’s good form continued into the second day of races, firstly with a fourth placement in the Time Trial after getting off her bike twice to fix her chain.

Liliya was again behind her in sixth place, Maya in 11th and Sonia in sixth.

In the final Road Race, Nicole had another podium placement, this tome coming second behind Belinda Bailey of Bendigo and District Cycling Club.

Liliya just missed out on the podium with a fourth placement and Maya came tenth.

Sonia earned her best result of the weekend in her race when she finished third in her Under 15 race, missing out on the lead by one second.

Overall, the highest achiever at the event was Nicole, who finished third in the general classification.

Both Liliya and Sonia finished sixth in their ager groups and Maya came in placed tenth.

The results are favourable for the young cyclists who still are preparing for the National Series to be held in Queensland this July.