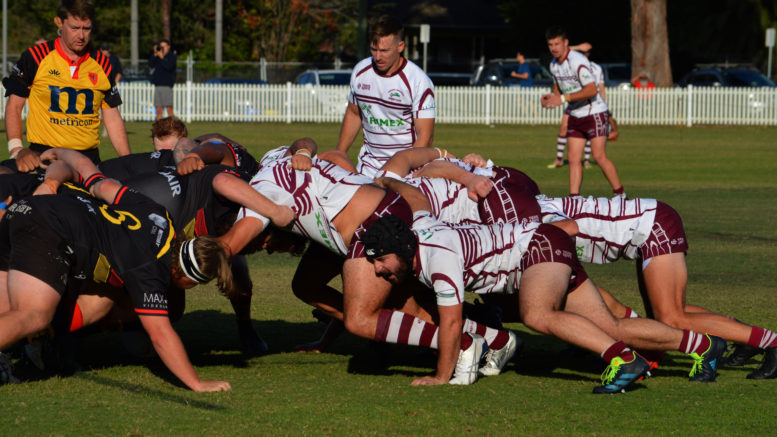 An exciting Round Four draw between the Kariong Wanderers and Hornsby has provided the Central Coast side one more point atop the Swietelsky Premier One league table, pushing them two points ahead of the Ourimbah Razorbacks.

The 26 – 26 draw at Mark Taylor Oval on Saturday, May 1, was neck and neck for the entirety of the 80 minutes and was only tied up with the last play of the game.

The opening try of the game went the way of the Wanderers after only two minutes, but Hornsby responded quickly with their own five pointer to bring the scores back to one try apiece.

The first half continued in this fashion, with both sides claiming the lead only to have it snatched back by their opposition.

It was Hornsby who found themselves ahead at half time after coming from behind to score a late try and bring the score to 19-12.

The high intensity competition continued in the second half, with both teams earning their respective periods of attack and then falling back into defence.

First, Kariong locked up the scores at 19 – 19, and they remained deadlocked for a long period of time.

The late lead came back for Hornsby through a converted try with ten minutes left in the game, and it looked like they would secure their first home win of the season.

But Kariong were not to be undone, finishing the match with several close attacks at the try line that finally yielded a try in the very last play of the game.

Mitch Clay was successful with the conversion, bringing the end game score to 26 – 26.

The draw may have been the most appropriate ending for two teams who have shown themselves to be well and truly in the running for the end of season title.

It has also pushed Kariong to 14 points on the table, with the Razorbacks behind them on 12 and Hornsby just 4 points away on 8.

Earlier in the day, Hornsby found victory in the Women Ten’s and Premier Two games, whereas Kariong won in the President’s Cup.

Meanwhile at Slade Park, The Lakes came away with their first win of the season in a crushing 57 – 28 defeat of the Woy Woy Lions.

It was Woy Woy who opened the scoring in this match and soon found themselves ahead by 14 – 7.

However, The Lakes stuck to their strong set piece and gained pressure through the middle of the pitch with classy efforts from their backs.

Over the course of the first half, they gradually took back control of the match and cemented a half time lead of 26 – 14 before extending their lead through the second half.

The final game of the round was played at Heazlett Park, where Avoca Beach put an end to the Razorbacks’ undefeated streak in 2021 with a 31 – 24 point win.

Avoca opened up the scoring with two penalty goals to Sam Evans.

The Razorbacks were quick to respond and scored the first try in the match to reduce the lead to 6-5.

However, Avoca Beach regained the ascendancy and take out the match to enter the top four on the table with nine points.

Round Five promises to be a cracker in the Premier One league, with Terrigal returning from two byes in a row to play in a local derby against Avoca Beach, Hornsby hosting the Razorbacks in another chance to secure their season opening win, and The Lakes travelling to play Warnervale the inaugural Moroney Acreman Cup.