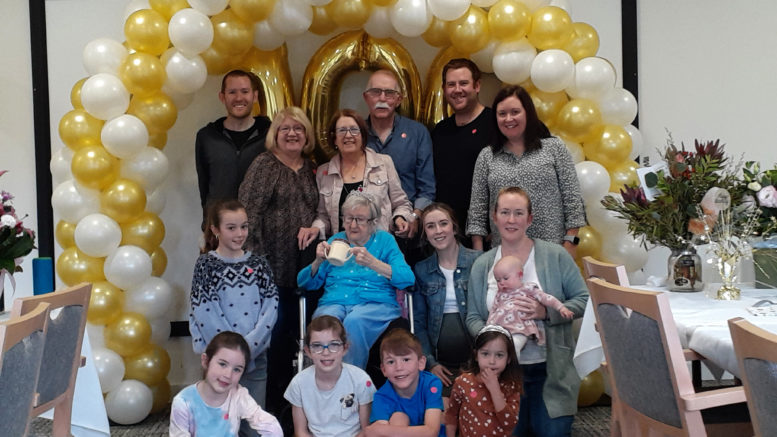 Josie and her family celebrating her 100th birthday

Local Central Coast resident, Josephine (Josie) Scott, celebrated her 100th birthday on May 21, surrounded by her children and grandchildren.

Born in Cairns in 1921, Scott grew up on a sugar cane farm in Silkwood, where she and her seven siblings helped on the farm as well as taking care of household chores.

Scott is the third child of 8 born, and she has two sisters and 5 brothers.

Her and her sisters often helped raising the family.

From the age of nine, Scott’s main chore was baking bread for the family.

Her commute to school looked very different to the normal school run now, as she and her siblings travelled to school on a push and pull trolley along the railway line.

As they got older, they were allowed to ride their ponies to school, which Scott’s daughter, Janet Davidson, said that these rides often turned into races to be the first one home.

“Once Mum was a little bit older, she started working as a housekeeper in Silkwood, this is where she met Dad.

“She was also a self taught dressmaker, she made all of our clothes growing up and for her grandchildren.” Davidson said.

Josie and her husband, William (Bill) Scott, were married in 1940, and they became the proud parents of three daughters, Janet, Lynette and Teresa.

Together the pair enjoyed 60 years of marriage, with Scott’s fondest memories being the many birthdays and Christmas celebrations and festivities that she has celebrated with her family.

In 1960, the family relocated to the Sydney suburb of Kingsgrove for new opportunities.

Here, Scott really dove into her passion for creating clothes, with her most recent and biggest accomplishment being four bridesmaids’ dresses for her granddaughter’s wedding in 2003, a feat she accomplished at 82.

Since 2014, Scott has been living in William Cape Gardens Aged Care Residence on the Coast.

To celebrate her centenary, her family gathered at the home on Friday May 21 and Saturday May 22.

The whole family was initially meant to all meet up on the Friday but due to ongoing COVID-19 restrictions limiting indoor functions to just 20 people, the decision was made to split the celebrations over the two days.

“My niece is making two cakes to celebrate Mum’s birthday, she always wanted to turn 100 and get a letter from the Queen which she received the other day,” Davidson said.

“Not being afraid of hard work.” Scott said is the secret to a long and happy life.